They were the luxury brand who dressed the military through two world wars, but seemingly couldn’t make it through the recession. So what’s the story with Aquascutum? Where did they go wrong and is there a future for the historic brand?

In April this year, despite Harold Tillman‘s best efforts, Aquascutum fell into administration leaving 250 jobs in the hanging. A few weeks later the company was sold for £15 million to a subsidiary of YGM Trading, who already owned the brand rights within Asia, saving 100 jobs. But scroll back to the brand’s beginnings in 1851 and it’s hard to believe it all went so wrong. Founder John Emary, a Mayfair tailor, patented a new type of water-resistant cloth and Aquascutum (latin for ‘water shield’) was born. The brand made officer’s coats during the Crimean war, as well as outfitting soldiers in both World Wars.

The brand attracted a royal following and warrants followed: King Edward VII being the first blue-blooded fan. Over the years, Aquascutum has dressed the powerful (including Winston Churchill and Margaret Thatcher) and popular (Lauren Bacall, Sophia Loren and Michael Caine amongst them) as well as had campaigns fronted by Giselle Bündchen and Pierce Brosnan and a large flagship on London’s Regent Street. In 2009, the team that rescued Jaeger bought the company  but less than three years later administration was calling, at a time when other British heritage brands like Burberry and Mulberry were flourishing.  So, let’s look to data to pinpoint where the brand went wrong.

1. Data ignored
Looking into our commercial database which tracks how Aquascutum products sold at retailers globally, we saw the first sign of trouble. The product mix is uninspiring, but we’ll get to that later. The main concern here is that Aquascutum seem not to have tracked their products at the retailers they supply. Unsuccessful products are re-run in new seasons and success stories drop off the radar. Take the £250 leather Regent Hobo bag from May 2011, which sold out three colourways at Selfridges with no discounting and was subsequently re-stocked over the Christmas period. Did that, or the similarly successful £350 Regent pouch bag from the same line get reworked in an updated palette for a SS12 drop? It did not. Instead, the brand pushed its Hunter range of checked polyester/cotton bags with leather trims. At John Lewis, the Hunter small shoulder handbag was introduced in January at £225 and saw its price change four times before finally selling out seven months later – no reorders for Aquascutum here. What’s more, not using their premium leathers and craftsmanship does them no favours as a heritage brand. A John Lewis customer review of a bag from the poly/cotton Hunter range highlights the disappointment: “This bag was smaller than I had expected and looked quite ‘plastic’, I did not think that it was value for money and felt that I was paying for the label….I shall be returning this product.”

2. Pricing of those products
The Hunter bag, which had its pricing changed four times, is just the tip of the iceberg for Aquascutum’s pricing woes. The brand’s renowned core product is the raincoat. They should have a clear, defined pricing strategy for this garment, across seasons, as well as a seasonal adjustment for trend-led versions. Instead, the pricing is chaotic – it’s no wonder Aquascutum alienated their customer base. Take the Franca mid length trench coat at John Lewis, which was introduced in May 2011 at £600, before dropping to £300 a few weeks later. By August the coat was back to £600, was discounted to £475 for a week in October, returned to £600, dropped to £450, then £400, then up to £650, before dropping to £350….need we go on? It’s a merchandising nightmare and baffles the consumer. Where is the value in the product? It seems Aquascutum were clearly not having the right conversations with their buyers, nor tight enough control of how their products were sold.

The Franca trench coat is just one example in a catalogue of errors. Painting the picture clearly is the price distribution of Aquascutum products. You can see that the most invested-in price points at the brand’s largest retailers are £45-140. There is some investment at the over £400 price point, but not significantly. Aquascutum’s biggest accounts weren’t buying enough of their higher price points. Compare this to Mulberry, who have a really healthy spread of price points, showing healthy relationships with their retailers. Although Aquascutum pitch themselves as premium fashion with a heritage, their price point is actually more similar to Barbour’s than Mulberry or Burberry’s. Their branding doesn’t communicate this to their customers, leaving everyone uncertain about their pricing, including those they need to impress most: the buyers.

3. Where are the dresses?
So, there are pricing errors in Aquascutums offering, but further investigation suggest the offering itself may have critical flaws. Look at a breakdown of the categories at any large womenswear retailer and you will see dresses in the top two biggest categories. This is true for two of Aquascutum’s biggest customers, Selfridges and John Lewis. And yet, look at Aquascutum’s seasonal runway offering and an alarming picture emerges. For SS12, Aquascutum showed 5 dresses. Compare this to Burberry’s 10 and Mulberry’s 14. For AW 12/13 Aquascutum did just 3 dresses, whilst Mulberry did 9 and although Burberry only did 3, they showed 34 skirts. Dresses sell. Dresses are what celebrities are most likely to be pictured at events in. Dresses change so dramatically every six months that your ardent fans will buy-in each season. A slight adjustment to a trench coat does not encourage a customer to make seasonal updates. This could well be Aquascutum’s biggest error. Taking some time to understand your retailers will result in more sales.

4. The wrong trends
The entire highstreet and most designers know that the heritage trend is killing it right now. Consumer sentiment and volume has remained steady over the course of the last 12 months and Burberry’s success has hardly been secret. Why then, have Aquascutum been sending out sleek sports luxe looks when they are so perfectly equipped to flaunt the heritage trend? Designer Joanna Sykes won rave reviews from the fashion press, aligning her with the design sensibilities of Phoebe Philo at Céline or Hannah McGibbon’s stint at Chloé. The homage to the sports luxe trend had Sykes marching to the same beat as sleek New Yorker Alexander Wang. All very flattering, but where is Aquascutum’s USP? The brand’s trump card is their heritage and Britishness, which was left unplayed. In the last year there has been massive global attention on the Royal family, with the wedding and then the Queen’s Jubilee. Aquascutum missed a trick; this was prime time to play up their military background and harness their craftmanship expertise in a British product for global consumers.

5. No customer engagement
For any brand, social media isn’t a do-or-don’t-we decision. These days it’s a do or die. Aquascutum were late to the game, and despite attracting a big fanbase increase during LFW in February, it was too little too late. They created an initial Facebook page in August 2011, which was later abandoned, with only 338 followers. A subsequent  Asian-specific page was set up at the same time, which is maintained, but only has 1,527 followers. Meanwhile, an Aquascutum Golf page dedicated to their golf range has been around since 2010, but again only has 1,585 followers.  Meanwhile, Aquascutum joined Twitter at the end of January, just before London Fashion Week. In the intervening seven months, they have only tweeted 166 times. Poor show from their social team who were clearly not in control of their online conversation. If you don’t make it clear who you are, consumers will decide for themselves and it may not be favourable.

Their visual merchandising didn’t speak any more succinctly. There’s little change to make returning visitors feel like exploring will bring up new finds. From October last year until December, the homepage featured the same image: A Tinker Tailor Soldier Spy still, promoting the trench which featured in the film. With a homepage update on the 21st February, customers were encouraged to ‘Connect with Aquascutum’ through a Twitter link. This disappeared with the July homepage redesign and is still absent. Some of the site’s functionality is also questionable. People aren’t going to buy into premium product if its selling platform isn’t ship shape and engaging.

It’s true that YGM’s holding of the brand rights in Asia prevented Aquascutum from being able to grow their business into the lucrative luxury market which has served Burberry so well. But only with the correct product, pricing and communications, would Aquascutum have been ready to move forward. Here’s hoping they shape up before they’re shipped out altogether. 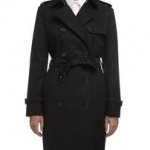 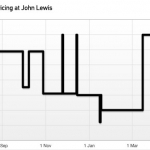 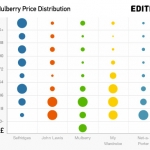