Sunday’s runway marked Victoria Beckham’s 8th season showing and with it came the kind of execution expected of a confident designer. The eye-watering fits were a lesson in the female form, and the sports luxe theme didn’t feel hackneyed. Husband David’s charming front row behaviour didn’t do any harm either.  Meanwhile, the first collection from the more affordable sister line Victoria by Victoria Beckham is set to land in stores next week, with a party at Harvey Nichols during LFW being planned. In November of last year she scooped the British Fashion Award’s Best Designer, pipping Burberry, Tom Ford and Stella McCartney to the post.

So, it’s been quite the rebirth for VB. It wasn’t all that long ago that her public persona focused around football match attendances and now she’s selling big. In the last 90 days there have been 229 Victoria Beckham product SKU’s in our database. 51% of those were new products and 29% sold out. The brand’s commercial success spans its product’s price points; with sell outs  of £2000 dresses down to £100 jeggings.

Top success stories include last season’s belted silk-gazaar dress, exclusive to Net-a-Porter priced at £1950 which sold out in 5 sizes with at least two restocks. The formula is working at Shopbop too; last month they sold out of the $350 Clean Shift Blouse across three sizes and two restocks. The lower-priced Victoria Beckham Denim line at The Outnet flies out too. The £134 creased jersey leggings were placed on promo and sold out in five sizes in a day. 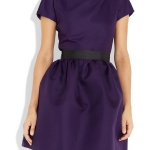 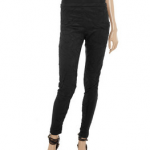 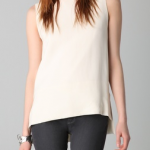 Why does it work so well? Because VB knows what her appeal is. Having generated vast global celebrity, she knows the cache that her taste level garners. By making sure she wants each item, she in turn knows her customers will. And she’s aware of the scale of her potential customer’s interest. In the past quarter, she’s attracted 512,039 new online followers – an increase of 13%. Fourth child Harper’s birth in July of last year saw her online mentions rocket to an all-time high. Two months later her SS12 nearly got as many hits. David packs some clout too – coming 12th in the global charts for most-talked about person.

What’s interesting is the amount of control there appears to be in the online discussion – with clear spikes at key dates in the Beckham’s calendar, but then very little in the way of unexpected or malicious chatter. In fact, the most negatively received event in the last year was VB’s daring to wear flat shoes when she’d slipped a disc – an unplanned hiccup in a perfectly executed marketing strategy!