Laser cut garments have flooded the high street. It’s easy to forget that they haven’t always been so readily available. This is more than a trend: it is also underpinned by the adoption of new technologies, where we are seeing supply chain problem-solving to manufacture these garments. So has the hassle been worth it? Does lasering make the cut?

Laser cutting was once solely the province of haute couture brands whose delicate laces and beautifully intricate leathers were seen by the public a couple of times a year through glossy magazines. But a number of things happened. Firstly, there was mainstream acceptance of the internet as a place to talk about and share commentary on fashion and creativity. More people could be seen voicing opinion on the technique, and as we know at EDITD, online consumer opinion drives trends. Add to this a surge in interest in paper cut art, with pieces from popular artists like Rob Ryan, arriving in card shops on most high streets. Consumers are becoming more interested in textures and appreciative of technique. Happily, laser cutting technologies were more readily available to garment and fabric manufacturers. Laser cutting no longer had to be outsourced to bespoke companies, but could be a process integrated into clothing production, from Alexander McQueen to Forever 21. So how did that widespread adoption pan out for both ends of the market?

As you can see from the chart to the right, our commercial database, which tracks over 8 million product SKUs from retailers and brands globally, is currently monitoring 2238 products featuring laser cutting. These are being designed by 648 brands and sold through 100 retailers world wide. These figures are high, but we can only place them within the context of a trend when we look at the price spread. Our software automates a price distribution for any garment type or search term within the database. We can see the top stockists of the trend are Shopbop, ASOS, Zappos, House of Fraser and Neiman Marcus. Shopbop address a wide range of pricepoints, showing their confidence in the trend. ASOS have also represented the trend across a wider span of price points than the competitively-priced retailer normally choses to. Neiman Marcus have aimed high, with a huge majority of their product offering sitting at the $500+ price point. Seeing retailers confidently investing in a garment or style across a wide spread of price points is a sure sign that the trend will be a commercial success.

We can measure that too. Let’s look at the designer stuff first, as that’s where the technique emerged. Alexander McQueen embrace new technologies and execute them beautifully. Laser cutting is no exception: the brand’s antique-rose lace dress features an overlay of laser cut patent leather. (It was styled in the SS12 collection with a matching full-faced mask, which even a mega-trend may find hard to work.) Net-a-Porter have been selling the dress for £3,967.25 since the 29th March and you’d better move quickly, because four of the seven sizes are sold out.

The still-aspirational, yet more-affordable Alexander Wang backed the trend too, which is working out well for Barneys. Wang’s laser cut mini skirt from the SS12 collection landed online for Barneys on the 14th April, retailing at $450 and has sold out in two of three sizes.  Then there are accessories, for which this trend works remarkably well. Belle Sigerson Morrison’s laser cut ballet flats are priced at £150 and have sold out in 11 sizes since the 14th April for Net-a-Porter, leaving just two sizes in stock.

So, we look next to the fast fashion section of the industry. ASOS‘s premium range, BLACK, used the technique with their impressively priced £120 neoprene laser cut dress. The style dropped back in November and sold out of the majority of sizes within three months. Only the 12 and 14 remain instock, but what is especially interesting is that this garment has seen no discounting, despite having been online through two sales periods – a sign that ASOS value the garment and have confidence it will clear full-priced. Perhaps also a suggestion that they are continuing with the technique next season?

Boohoo carried a similar style, though in polyester not neoprene, across three colourways: white, blue and pink. The £20 garment arrived instore on the 28th April and sold out of all sizes in white in under a month. The blue has one size still in stock, whereas the less popular pink has two. Forever 21 are never too shy to tackle a trend either: their new season geometric laser cut Oxford shoes priced at £18.75 are sold out in three of five sizes.

This trend flies. And it’s not just in our offices that the technology and fashion worlds are colliding – consumer interest in, and understanding of, scientific and tech worlds is higher than ever. With manufacturing processes invested in the technique and given that laser cutting appeared on the AW12/13 catwalks, don’t expect this trend to go away anytime soon. But what’s next? Following the lead of visionary designers like Marc Jacob and Christopher Kane, the next tech-stop will be plastic-coated and laminated fabrics. Expect to see a range of performance techniques applied to unexpected fabrics and used in garments not normally associated with hard-wearing properties. Then the next frontier will be 3D printing – as used by Dutch couture designer Iris van Herpen in her collaboration with .MGX by Materialise. Brace yourself, there’s exciting times ahead! 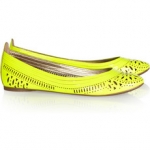 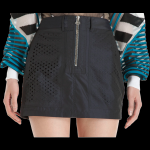 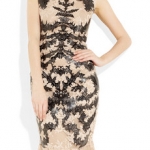 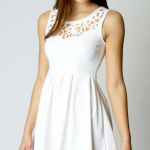 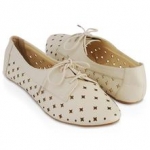 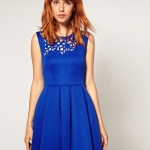 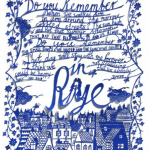 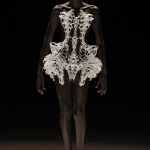 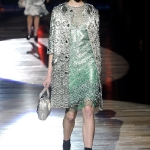