With 470 different styles selling out in the build up to Christmas 2014 (up 205% from 2013), there’s a high chance you’re reading this wearing your own snowflake-covered sweater. In recent years, Christmas jumpers have travelled from Bridget Jones banality, to knowing, ironic gag and now on to mainstream norm. We couldn’t resist sharing some of our festive sweater data in our Season’s Greetings this year. The EDITD Christmas tree represents the seasonal sweaters for 2014, with each tier depicting the weighting of characters featured on sweaters. The star atop the tree symbolizes the 10 biggest retailers of the festive sweater, with the length of each point showing the spread of prices at those retailers. So, what did we find?

US vs UK – The biggest backers

The ten biggest stockists of festive sweaters are all UK retailers, and are dominated by the mass and value segment, which represent 75% and 21% of the market respectively. ASOS are the world’s biggest online retailer of Christmas sweaters – no surprise given the retailer’s history with other novelty trends like the onesie. Their offering for 2014 spanned price points $24.42 to $282.56. There’s even festive t-shirts and cropped tops for their customers in warmer climes, or those with the central heating turned up!

In the US, the largest stockists of holiday sweaters were Target, Macy’s, Zappos and Nordstrom. Prices in the US spanned from $9.99 to $119.

The majority of retailers who’ve invested in this trend with force are family retailers, as seen by the presence of George at ASDA, Debenhams, Littlewoods, Tesco F&F and Matalan in the top 10. A gender breakdown shows the festive sweater market to be made up of 43% womenswear, 42% menswear and 15% childrenswear.

The largest stockists of holiday sweaters in the US are @Target, @Macys @zappos and @Nordstrom.

The most expensive festive sweater to arrive online this season was by Markus Lupfer at Selfridges. His Puppy Stocking sequin-embellished wool jumper retailed at $500.53 and sold out. The cheapest was Glamorous’ Ho Ho Ho women’s sweater for $9.69 at USC, which is still in stock across all sizes. Looking at historic data we can see that, predictably, sell outs of festive sweaters peak in December, and new arrivals peak in October. 2014’s new arrivals beat 2013’s by 135%. Average price of those October arrivals has shrunk by 16.5%, down to $40.46 for 2014.

There were equal numbers of reindeer and snowflake motifs on the market. Snowmen were in third place, followed by Santa. However, the bestselling festive sweaters this season featured slogans – “Ho Ho Ho”, “Merry Christmas”, “Happy Birthday Jesus” and “Tickle My Baubles” all sold well! Reindeers were the second most popular featured motif. As we advised in our Black Friday discounting report, many retailers have discounted on these novelty items ahead of Christmas – 387% of the current online offering is reduced, by an average of 15%. ASOS, New Look and Boohoo are the biggest discounters.

Bonobos deserve a special mention here, not for their festive sweaters, but instead for their “Panta Claus” – the one-leg-green-one-leg-red chinos they release especially for the festive season. At $118 a pair, they’re not bargain basement novelty, but we expect they’ll be creating many a smile at celebrations this holiday.

Regardless of whether you’ve invested in a Christmas sweater, we’d like to wish each and every one of you a very happy holiday and all the best for 2015. It’s been a great year for EDITD. Thank you for your support over the past year. Season’s Greetings! 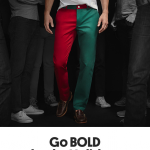 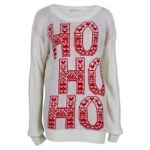 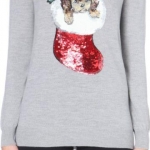