Part three of our SS15 trends looks at the key themes and colors. These directions move on from existing success stories neatly, ensuring that customer demand is optimized. Runway analysis and commercial data on what’s selling and what’s not helps pinpoint the following:

In a world where runway looks make it into fast fashion stores faster than the original can hit retail, this theme is about imbuing originality, creativity and authenticity into designs. With designers including Chanel, Prada and Jil Sander using art prints in recent seasons, this story was given continued support for Resort 2015 from Burberry and Dior.

Colliding the two worlds makes sense: it’s a slice of commerciality for an artist, and an alignment with a world away from the mass market for designers. For the art trend, the creative print work can be the result of collaborating with an artist, like Prada did for SS14 with 6 different artists including street muralists and illustrators, or using in-house designed artistic prints, like Kenzo and Zoe Jordan did for SS14.

Premium and mass market retailers are getting in on the art act too – J.Crew’s range of t-shirts with illustrator Hugo Guinness dropped into store through SS14, with many styles selling out fast. Art collaborations can also help open a brand out to an international market – Australian brand Gorman have recently paired up with Brooklyn artist Kate Kosek. For SS15, both brands and retailers will continue to get freer and more creative with prints, using watercolor, graphic etching and screen printing as the start point for exciting garments which will stand out from the pack. 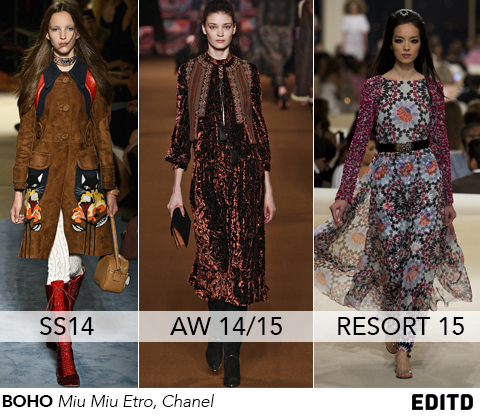 Boho vibes have been relatively absent from recent seasons as sports luxe urbanism took to the fore. We’re expecting SS15 to change that, with a return to undone earthiness, ethereal prints and beaded detailing, ideal for high summer. Using far flung travel destinations as inspiration, this trend leads on from the Safari theme of SS14, seen at Jason Wu, Trussardi and Akris.

In SS15, the bohemian story will allow the development of key commercial garments such as maxi skirts and dresses, pretty silk fabrics, kimono sleeves as well as showcasing the innovative spring layering that has been so popular in street style. We’re anticipating some unlikely backers of the boho trend, as designers seek to create new direction – designers, particularly in New York and Paris, who have prescribed heavily to sports luxe and futuristic looks will use bohemia to forge newness.

In part, the 1970s trend for SS15 can team up with our bohemia revisit, as Summer of Love and Woodstock referencing collide. However, we’ve chosen to separately mention the 70s theme, as we believe there will be referencing to the decade which is decidedly non-bohemian. Instead, we’ll see luxe evening wear with hints of Studio 54 and tailored workwear nodding towards Annie Hall.  It’s the hinting here which is key – this is not a camp or retro rerun of the decade’s hits but instead subtle nods to an influential decade, but updated to suit modern demands and women. A little suede, a slight flare, a higher neck, a faded Op Art print, a smock shape done in silk…informed and none of it overt. See 3.1 Phillip Lim’s Resort collection for an early heads-up.

The 1990s served SS14 well – cropped tops and camisole or slip dresses were two of the season’s 10 most successful garments. That reason alone will ensure that buyers are on the lookout for an update. SS15 will provide a straightforward transition, as 90s referencing shifts into early 2000s. There is still a place for sportswear here, casual dressing is a macro trend which designers will continue to work with. This trend has functionality at its core, while slick colors, the occasional splice of Millennium bug metallics will add a fancier edge. Cropped and varying lengths in tops, capri pants, dresses over leggings and cycling shorts will create visionary layering without bulk and will be a great trend for bridging between seasons.

While pink was the best-selling shade for SS14, the presence of reds, oranges and yellows was ramped up on the Fall 2014 runways. Color trends in retail can move more slowly than runway, particularly around seasonal palettes, as we saw with pastels which only soared for SS13 despite having been on the runway radar for two seasons. We’re expecting the same from red and yellow.

The market is ideally primed for a strong uptake of yellow and red colors in SS15, both currently have low rates of discounting: 30.7% of current red womenswear products are reduced, and 28.6% of yellow products, compared to 39.4% of pinks, 37% of orange and 49% of blue. A breakdown of market segmentation for red and yellow is interesting too, showing high levels of the shades being in the luxury market, compared to other shades. For red, 12% of products are within luxury segment and 19% of yellows (compared to 8.7% pink and 9% orange). This shows designers brands are beginning to build the color trends’ credentials beyond mass market. The average price point of current garments backs this up – $307 for yellow and $266 for red, compared to $146 for pink. Furthermore, in August saw a a 18% increase in new arrivals of red products in comparison to August 2013, and a 33% increase of yellows on the market.