Colour-phobic? Brace yourselves, because if the Resort shows are anything to go by, things are about to get garish. Back at the start of June, we talked about the power of clashing prints but this goes one step further. As if the past two seasons of womenswear haven’t been psychedelic enough, the news is we’re going head-to-head with full blown, amazing technicolour that would have even Joseph hiding in the palm trees.

The warning signs were there in the SS11 shows; deckchair stripes and tropical palettes from the likes of Prada, Wunderkind and Sonia Rykiel. Raf Simons added fuel to the fire with his monumentally successful colour blocking for Jil Sander and Christopher Kane got us loopy with lust for his SS11 neon parade. The latest colour shot takes a more cartoonish twist, think Rainbow Brite chumming up with the Care Bears and hitting Studio 54 and you’re half way there.

The high street has already celebrated success with early explorations in tasting the rainbow. Who can forget the numerous versions of the Simone dress by Marc Jacobs, worn by Michelle Obama. Topshop and Primark cashed in with their versions, which garnered much press coverage and early sell-outs. The original didn’t lose out to the copies; it sold out within 11 days at Net-a-Porter and Shopbop and was restocked four times at Bloomingdales. Jaeger’s £160 Boutique Rainbow Stripe Dress has been restocked 8 times in size 10 by ASOS since its drop in March and is now sold out in four sizes. Jeffery Campbell got in on the fun with his footwear, producing a near-prefect copy of Salvatore Ferragamo rainbow shoes from the 30s. Campbell’s ‘Groovys’ were a sell-out at Urban Outfitters and they’re still creating buzz in the blogosphere.

Online, sentiment towards brights is running high in the US, UK and Australian markets – and this is reflected in the emergence of brights not only in the fashion world, but in beauty too. London-based Wah Nails’ phenomenal success has raised the bar on grooming, their Rainbow Stripe manicure at £39 a pop will ensure your talons are on-trend.

Retailers would be wise to don their shades and embrace the glare, for putting their money on rainbow could well result in a pot of gold at the end of the season… 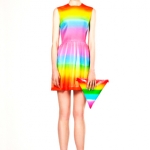 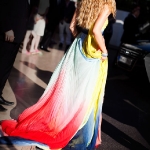 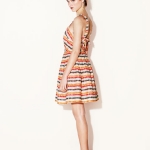 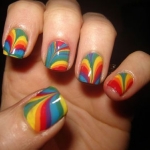 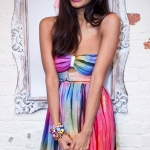 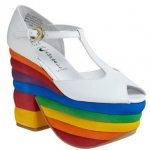