We recently discussed the prevalence of trans-seasonal looks on the runway, focussing on the frequent appearances of fur, heavy fabrics and wintery palettes at the SS14 shows. Leather, of course, played a significant role in bridging the seasons on the catwalks last month, and it is also appearing as one of AW13/14 top 10 trends. However, it seems it’s not only high end designers who have gone crazy for the luxe fabric – the commercial data shows a 52% increase in the number of leather products arriving online in the last three months, compared to the same period one year ago.

The surge in interest surrounding the fabric is further supported by the increased global worth of the leather industry, which has gone up £16.1 million in the three years to 2011*.  We spoke to Le Cuir, the leather and fur trade show, in Paris, who reported not only an 8% increase in exhibitors at their September 2013 show, but a dramatic jump of 21.5% in visitors attending the show. The majority of that growth came from European visitors, but a 25% increase in US/Canadian visitors and 17.3% increase in Asian visitors to the event suggests that this is a global trend.

Consumer interest has piqued too, with the number of online mentions of leather skirts increasing dramatically since July this year, as demonstrated by the chart to the right. That timing has been supported by the AW13/14 digital campaigns of brands and retailers as well as notable celebrity appearances in leather from Rita Ora (leather joggers and crop top), Alexa Chung (patent leather dress), Jennifer Aniston (mini skirt) and Lily Collins (full skirt).

So which areas of the market have benefited from the surge in interest and product arrivals? Product arrivals in the last three months span £4.99 (a leather belt from H&M) to £35,610 (Rick Owens alligator skin jacket at Ssense). Helmut Lang is the most stocked leather brand globally, with Farfetch, Stylebop, Zappos and Nordstrom being the retailers with the largest selections. Although the majority of products sit between £150 and £722, the single price bracket with the highest number of options is actually £40-60, which signals the predominance of the mass market in this trend.

In the same three month period (17th July – 17th October), one year ago, the bulk of products sat in a price band of £85-425 but with £20-40 being the single price bracket with the highest number of products within it. So, not only has the average spread risen, but so too has the mode price bracket. In fact, 2013’s popular £40-60 price point has increased by 164% from one year ago. Currently, Urban Outfitters, ASOS and Zalandos are the three biggest retailers of leather at this price point. In 2012, the £40-60 offering comprised of biker jackets, skirts and shorts. 2013 has seen a greater ratio of skirts and dresses, plus the presence of patent leather.

Breaking the leather trend down into different categories, across all price points, proves the largest growth is in skirts, with an increase of 86%. Leather dresses have increased by 76%, outerwear by 60%, trousers by 39% and shorts by 20%, compared to one year ago.

So what’s selling? At ASOS, MuuBaa’s £300 leather trousers, which arrived on the 3rd September have been restocked twice in sizes 10-16. ASOS Curve’s leather biker jacket at £100 is a continued success, having been restocked three times across the entire 18-28 size range. ASOS’s £90 calf-length pencil skirt has been restocked twice in two colourways (oxblood and black) in sizes 4-18, and was also a success last year in green, white and tan. Fast-fashion, value retailer H&M has also seen success with the leather trend; their £69.99 leather skirt that arrived on the 15th August has sold out within a few days each of the three times it has been restocked. Other value retailers are experimenting with the trend courtesy of cheaper cuts of leather – Zara’s £59.99 leather skirt that arrived on the 11th August and has been restocked in M and L, is sheep’s leather and Bershka’s £49.99 pink suede biker is pig leather.

With retailers and consumers continuing to look to the catwalk for more direct references, and the likes of Topshop and Whistles hosting runway shows of their own, leather is an ideal indicator of more aspirational design and carries high fashion connotations. Leather is also a great choice for a retailer looking to expand their price architecture into new territory. Whilst the trend for biker jackets, bombers, and the punk and sports luxe themes are still on the consumers’ radar, leather will continue to be an excellent way for retailers to demonstrate luxury to their shoppers. Developments in the quality of PU and imitation leathers further boosts the demand for the real thing.

Marks & Spencer have used leather to promote quality at value prices with a £199 Per Una Speziale leather dress in their Autumn 2013 range. It has been shifted to the front of their visual merchandising strategy too; leather apparel featured in 4 of their email newsletters from August to September.

So where next for the leather trend? Leather won’t be slipping off the radar anytime soon – it’s the ideal trans-seasonal fabric, and with unseasonably cold Northern Hemisphere Springs having caused retailers problems in the last couple of years, we will continue to see investment year-round. In the coming weeks, brightly coloured and black patent and laminated leathers will continue to shift units, but this is a slipstream trend which for SS14 will move on to pearlescent leather or printed PVC. Le Cuir’s trends for 2015 showed matt leathers, wrinkled effects and double-faced techniques fusing leather and wool. Retailers who find ways to tackle these trends at appropriate price points will push ahead, differentiating themselves from the bulk of black leather garments and luring consumers with newness. 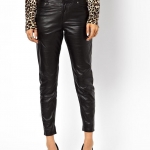 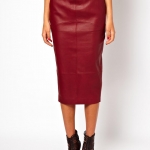 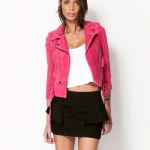