Starting tomorrow 100,000 bejeweled festival goers will trek across the Inland Empire dressed in their finest distressed denims and pass through the golden gates of super-commodified super-hipness. Coachella, week one, day one is here. Get ready retail world, festival season is about to begin.

Once the domain of poi jugglers and people who own Grateful Dead shirts, music festivals have capitalized on the mainstream’s (aka millennials) growing hunger for new experiences and exploded in popularity over the last five years. Considering that, in the US alone, almost 15 million millennials attend at least one music festival every year, it’s no surprise fashion has it covered.

It’s commonplace for retailers to plan for “festival season”, to discuss “festival fashion” and spot “festival trends”. The industry needs more ways to lure millennials to buy stuff, and festivals are a golden opportunity. Making direct correlations between product and experience puts apparel right in their line of sight. Plus, festivals are imminently more Snap- and Gram-able than smashed avocado toast on a bed of activated charcoal.

In both the US and the UK, retailers begin their festival communications in earnest in April. Email newsletter numbers take a nosedive around July time. 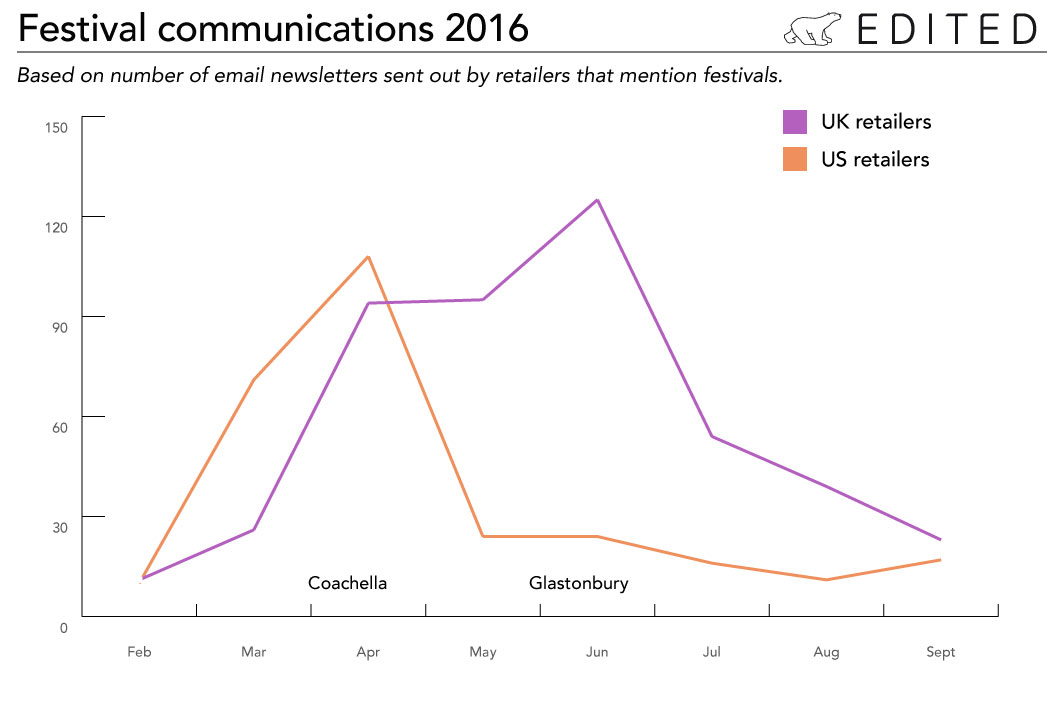 The US focuses heavily on Coachella, while the UK tends to keep up its festival promo throughout the full summer festival calendar. That’s a strategy US retailers should consider mimicking since attention around Governors Ball, Bonnaroo, Lollapalooza, Electric Zoo, etc… would create more airtime for festival product.

And the data shows US retailers are building the attention they give to festival season. So far this year there has been consistent growth in festival mentions in newsletters and April is on track to more than double last April. 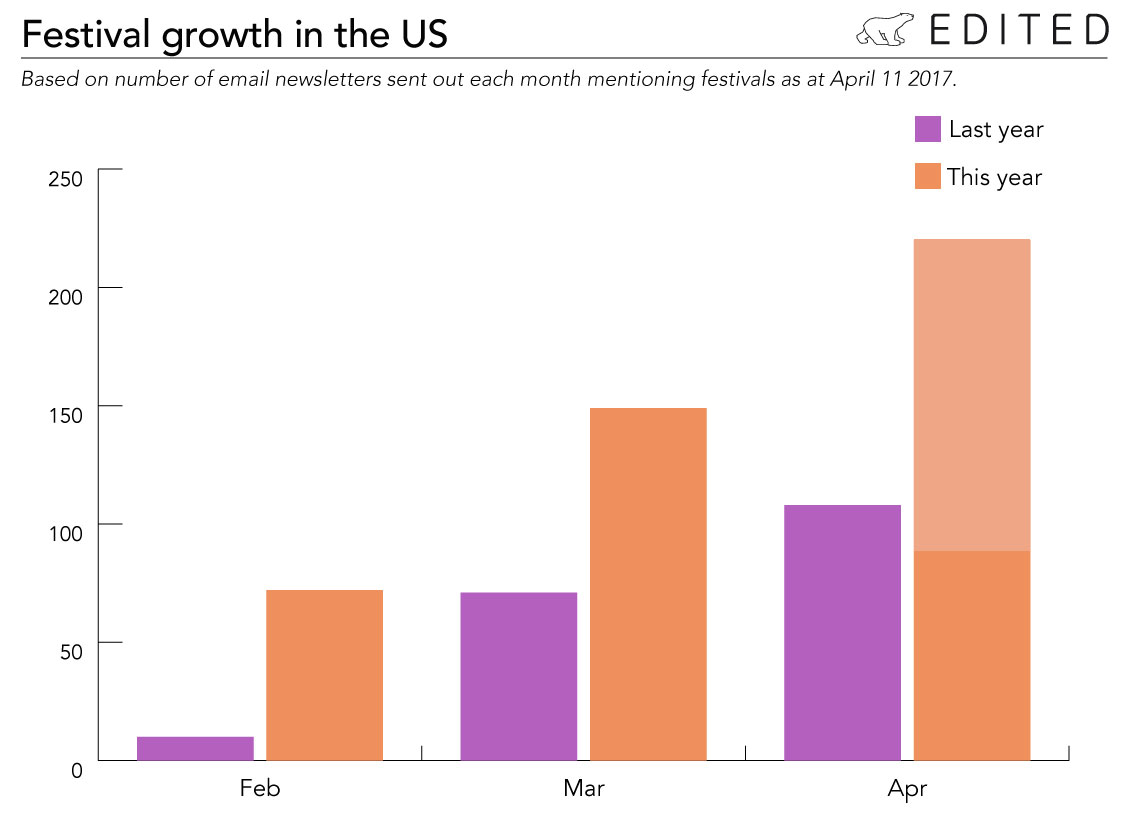 How much space are retailers giving to festivals?

At the generous end of the scale is US retailer Aritzia, with a festival section featuring 10% of its entire offering, though the market average sits closer to 2%.

Especially for the millennially ripe, trend-led mass market retailers, don’t these figures strike you as a little small?

Festival line-ups shift and change each year (Katy Perry playing Glastonbury?) but the typical ‘festival look’ hasn’t changed a whole lot from Kate Moss’s famed teeny shorts, studded bag and wellies combo. That was back in 2005. Twelve years ago. 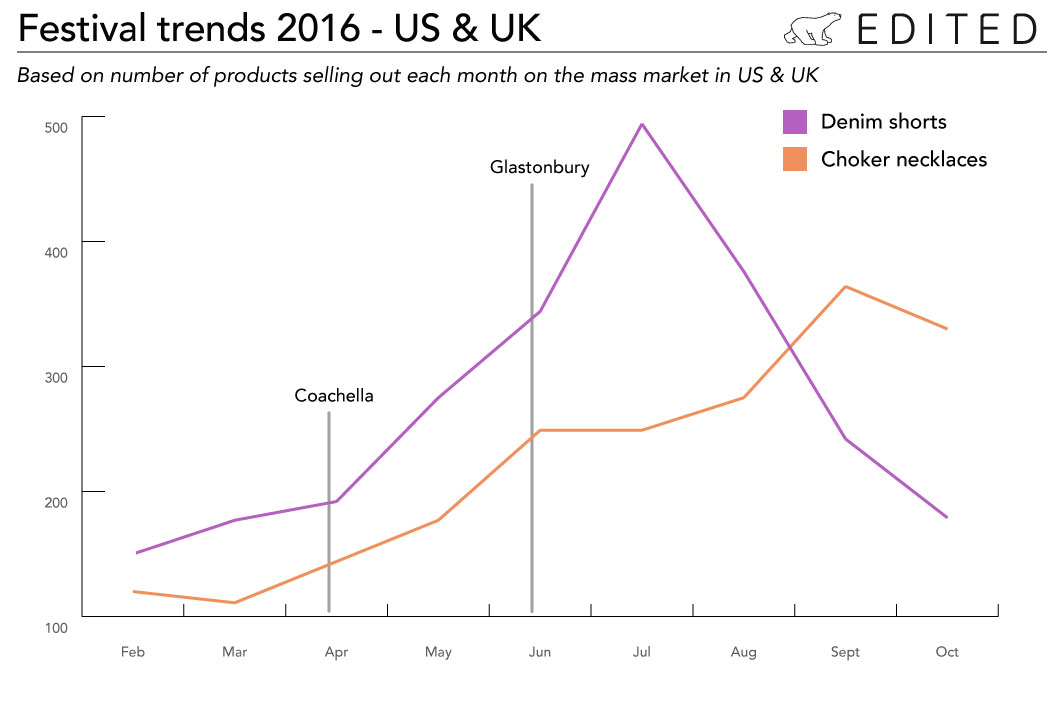 New arrivals of denim shorts are, predictably, up – by 13% in the last three months compared to this time last year. However, the growth has slowed: between 2015 and 2016 it was 29%. Retailers should take note that sell outs are also down by 14%.

Sell outs of denim shorts have  dropped, suggesting we’re about to see a new wave of festival trends.

It’s the same story for fringing, with new arrivals in the last three months down by nearly 7% compared to 2016 and sell outs dropped by 34%. Even floral headbands this year are suffering from a 28% decline in sell outs. Playsuit  sell outs are down too, by 7%.

Customers are over it. It’s now time retail caught up.

What festival fashion needs is newness

The festival category is crying out for newness. And if millennials are focusing their energy on experience, shouldn’t apparel be seeking tap into the creativity and delight of experience?

What it boils down to is: the festival category has to have more fun. We’re seeing it in trends like metallic rainwear (new arrivals up 20% in the last three months, and sell outs up 26%) but why not push this category to full tilt? A shout out to Pretty Little Thing who are doing exactly that.

This is the space to test the most out-there runway and street trends to capacity. Create clothing that embraces the hedonism of millennials, they’ll thank you in the selfies.

So what is working? The big leaders this year are embroidered denim, with sell outs up 199%, chokers, up 172% and bodysuits/leotards, up 59%.