The Only Way Is Essex inspired this post. But it does come with a disclaimer, I have never, and probably will never watch the reality TV show. I have nothing against Essex, or reality TV for that matter, but the show just doesn’t interest me. For those of you that aren’t familiar with ‘TOWIE’ (as the seasoned viewers like to call it) it is the UK’s answer to the Hills, essentially a reality TV show about somewhat attractive 20ish year olds who seem independently wealthy, despite never actually seeming to work.

So, on that note, I was obviously surprised to see a t-shirt in our EDITD Twenty this week emblazoned with the word ‘Reem’. I Googled it in the way that you Google words that your boss throws you in your first week at work as you nod intelligently and smile like you know what they are talking about. At 26 am I out of touch? Surely not.

I discover reem is an adjective used to describe something or someone that is hot, cool, awesome… really you can almost apply it to anything. As Joey Essex star of the show and reem creator once said “Look Reem, Smell Reem, Be Reem… Reem”. Secretly, I kind of like that.

While it is all good and well to create a reem meme, we wanted to determine how brands and retailers could capitalize on the burgeoning (and potentially short-lived) success of Joey and his linguistic skills.

Selfridges were quick to pick up on the trend and invited Joey himself to design a selection of t-shirts available exclusively through the retailer. The line was officially launched online last week, with the first eight designs available for £30. At this stage, all SKUs are still in stock. 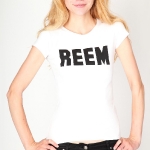 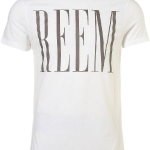 Which brings me back to the t-shirt I mentioned earlier that made it onto the EDITD Twenty this week. Unfortunately for Joey, it wasn’t his design, but an imitation design by high street retailer boohoo. The t-shirt dropped in store just a day before Joey’s, and is still available in all sizes but at just £6, it is far more accessible for the teen market looking to get a quick fad fix. Not to mention that it is also the 9th most talked about and shared garment online this week.

The retailer who really cashed in on the fad though is Topman. Super speedy to market, the t-shirts, priced at £14 are printed in an Elle magazine style font and dropped into store on June 1st. Size XL sold out within a day and in the following four days, so did all other SKUs. Since a restock on July 1st, the t’s have sold out twice in XXS and once in L.

We will be watching closely to see how sales of the boohoo and Selfridges versions go over the coming week, but our bet is that Topman have nailed the fad with a product that is suitably priced and has a level of scarcity, but is restocked intermittently. Most importantly though, was that their t-shirt was the first to market by a good six weeks. And in the age of reality TV, six weeks can equal a lifetime.