When Burberry put a denim jacket on their Spring 2015 runway last week, the industry reacted with surprise. The garment’s workwear roots, youth association and mass market adoption don’t make it a likely candidate for catwalk inclusion. But Burberry weren’t the only ones, with Milan Fashion Week comes Gucci’s interpretation, adding their industry-steering support to the trend.

Burberry and Gucci are a power-couple for propelling a denim trend to rapid success and the menswear shows echoed the sentiment, with Saint Laurent, Dior and E. Tautz in the boy’s corner. Certainly high fashion is enjoying more than a ‘moment’ of casualwear appreciation, thanks to a demand for functional apparel and the mainstream approval of sports – we’ve seen Givenchy and Kenzo work wonders with slogan sweaters in recent seasons and we’re all well-versed in normcore.

But what happens when an already stocked product hits trend status? Retailers will need to pay close attention to data as they reinvest in existing styles and should they want to update to optimize upon this new attention on a staple piece, will need to monitor demand, pricing and timing around trend-led pieces carefully.

EDITD Market Analytics software offers instant insight into the current market status of the denim jacket, globally. The womenswear market currently dominates with the denim jacket, with 53% of products. Menswear makes up 35% and childrens’ denim jackets represent 12% of the market. Both men’s and women’s categories have the same rate of replenishment: 10.4% of current denim jackets in stock have been replenished during their lifespan.

Pricing strategy differs marginally between the men’s and women’s market. Menswear denim jackets have a higher median price point, of $108 compared to women’s $90 (and kids’ $41). The $60-80 price band is menswear’s most-stocked range, whereas for women’s denim jackets it lies at $40-60. This is then reflected in the pricing of ‘successful’ denim jackets (determined here as products which have been replenished, at full price) – men’s successful styles are balanced between a span of $60-100, whereas women’s sit in a tighter range of $60-80. What does this tell us? Currently, the denim jacket is more of a premium trend for menswear than womenswear, and the market is less saturated with product for this segment.

It’s worth noting that colored denim jackets are not currently a big story. EDITD software powers the colorwheel you see here, taking into account every instance of shade seen in all denim jackets currently online. Stonewash, indigo and black denims dominate – colors outside of this are limited and stick to pinks/red and biscuit shades.

It’s also possible to drill down into the specifics around the timing of a trend, understanding when the market begins to warm and pre-empting the peak demand of a product. For denim jackets, a core of many retailers’ denim offering, we can see clear seasonality revealed in plotting the new product arrivals between January 2013 and August 2014. Despite appearing erratic, what we can actually see in this data is a trend towards an increase in arrivals of denim jackets in the months of February, March and April. Retailers ease back on new product in May and June during summer discounting, but deliveries peak again in July. The biggest growth in womenswear was seen this April, and menswear peaked in July. This data suggests the trend is well-placed to do well for menswear during Fall 2014, whereas womenswear will hit a high next April.

So which products are selling best? In menswear, Barney’s $198 Naked & Famous jacket has been retailing consistently since 3rd September 2011, with no price change and two replenishments. ASOS’s men’s Denim Jacket with Jersey Sleeves has been online since the 21st August 2013 and has been restocked three times, holding its price of $75.92. And representing the value market is Forever 21’s $19.80 Classic Denim Jacket has been online since the 19th July 2013 in two colors: the black which has been restocked once so far, and the indigo, restocked twice.

In womenswear, Nordstrom’s $74.50 KUT From The Cloth denim jacket has been in stock since the 8th October 2011, lifting from its original price of $69 in January 2014. It has been stocked six times. Nordstrom’s Paige Denim jacket at $186 has been retailing since 23rd February 2012, maintaining its price point. So too for the Liberty’s $515 Current/Elliott jacket which has held its price since 21st September 2012 and has seen a full restock.

Where’s the trend heading next?

The most recent arrivals online hint at the next direction best. In womenswear, the last month has seen a quilted and chain-trimmed $2,495 Moschino denim jacket come online. Superdry at Next, New Look, Mango and Salsa at House of Fraser all agree on faux shearling or fur collared versions, which arrived this month – Madewell’s version of the same was hooded and $475. Boohoo have experimented with a couple of bold patchwork styles. And of course, those Burberry numbers have gone straight online, such is the savvy retailer.

In menswear, a broad spectrum of designers and retailers agreed that shearling (faux or otherwise) is the direction for Fall – Diesel, River Island, Tommy Hilfiger, Levi’s and Topman have all dropped new styles into store this month. There’s also refreshing newness in the styles covered in badges, patches and motifs, from ASOS and Vivienne Westwood. This month has also seen black menswear denim jackets increase their profile, with new styles arriving from Cheap Monday, River Island and Givenchy – simultaneously backed by the mass market and high end.

Retailers will want to watch how these new styles perform in the coming weeks ahead of the competition which will surround SS15. 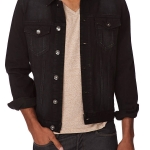 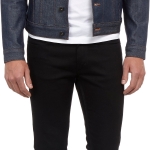 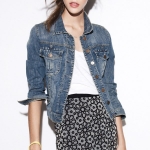