You can’t fail to have noticed the brogue intrusion of recent seasons, flooding the high street with mannish kicks. Flat-soled, with leather-uppers and punched detailing, the traditional shape has had something of a rebirth and is now a style staple. Fast forward a couple of seasons, and the evolution has taken a warped path. When Prada showed their much-lauded SS11 collection last September the buzz surrounding their footwear was instantaneous. We saw the traditional brogue elevated to new heights in a freakish mash-up with a striped-soled platform, which became an instant hit. The hybrid creation was not only lapped up by hordes of editors and droves of bloggers but the £510 shoe sold out as soon as it hit stores and a waiting list was formed.

Pair this with the re-emergence of the brothel creeper, and you can see that fashion was on the brink of a very sole-ful moment. The brothel creeper was originally claimed as the footwear of choice by the Teddy Boys of the late 50’s and then adopted by rockers in the 70’s courtesy of Malcolm McClaren and Vivienne Westwood‘s Kings Road shop. With rockabilly styling becoming more mainstream, the shoe has been trying to edge it’s way back onto the fashion scene for a number of seasons. One of the first designers to take note was Alexander Wang who designed a leather brothel creeper boot, complete with fringing and buckles for his AW09/10 collection. Wang’s boots were the perfect vehicle to translate the look for the urban style set and hey presto, we’re creepin’ with the best of them. 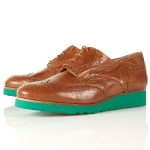 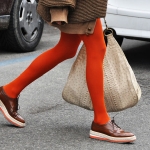 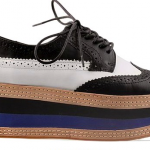 So how do these flatforms and brothel creepers translate in retail? Both harness the comfort and wearability of the classic brogue, but with a trend-edge which should translate into sales. At designer price-point, Miu Miu’s £310 platformed patent leather lace-ups sold out in 5 sizes within less than a month when they landed in store in late-June. When similar high street versions first dropped, a huge amount of buzz was generated online and opinion climbed. ASOS were quick off the mark with their first versions beginning to trickle through in March. Their latest arrivals, which dropped yesterday – the £85 Mackie platform brogue – go full-pelt, with their silver and blue metallic leather and thick rubber sole, certainly not a look for the faint hearted. 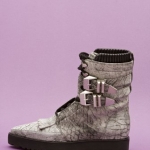 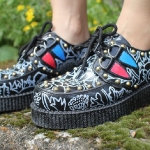 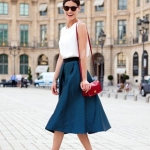 Topshop have backed the trend too, two weeks ago dropping their £60 Kingston tan leather brogues complete with shocking turquoise platform. More classic (non-Prada inspired) brothel creepers have appeared at Miss Selfridge and River Island, whilst Underground teamed up with British designer Ashish to release black creepers which arrive complete with a Tippex pen to customise, in true rebellious form.

With the majority of styles dropping in the past few days, we’ll be watching keenly for sell-outs and restocks. However, our insight suggest that this is a fad-based trend for which we predict little longevity. The buzz will probably continue to surround the product as more key styles drop in store, and we expect to see a peak within the next month. Beyond that, it’s time to get back to the laboratory and start meddling with the next hybrid….