Hemlines, trouser shapes and sleeve lengths change seasonally, but it takes a little longer for the exposure of a previously covered area to be adopted by the mainstream.  Backless, hipster and plunge find themselves returning to trend far less frequently than easier to wear shapes. But there’s one reveal which has made it to rapid success: where did the midriff suddenly spring from?

The exposed midriff has a celebrity endorsement of the highest pedigree, having seen red carpet outings on Gwyneth Paltrow, Rooney Mara, Scarlett Johansson, Jennifer Lopez and Solange Knowles. A mixed bunch, appealing to a broad assortment of customers. And then there’s Rihanna, who can’t keep her abs in for love nor money (and why would she?!): given her 85 million online followers, there’s a fair few eyeballs on her sartorial choices.

But from where did the trend stem? And once it’s taken away from the honed and toned A-list bods, does it actually sell to the masses? Are consumers willing to part with their cash and parade their ribcages? Examining the data, we expose more than a little flesh.

Look back a year ago to that stellar Stella McCartney collection from Autumn/Winter 2011/12, which graced a mind-boggling number of magazine covers and a-listers and you’ll spot the exposed midriffs of Kate Winslet, Kate Hudson and Jane Fonda amongst the acres of black and streamlined frocks. In the same season, cool kids Carven were up to flashing tricks with their twill tartan cutaway dress. Shown in February 2011, it didn’t take long for highstreet retailers to react; very quickly stomach-baring cutaways appeared on the bodycon dresses they were offering. So where are we now? What’s selling and to who?

Let’s first look at Rih Rih’s preferred flesh flasher: the bralet. A relatively new garment to the fashion scene, it’s easy to see consumers latching onto the terminology and their sentiment towards the piece grow. Sentiment towards the garment ran high following the September SS12 shows, but volume of chatter was still low. Fashion insiders were raving about what they’d seen at Dolce & Gabbana but the consuming public weren’t yet onboard. When the high street versions arrived in March, volume of chatter soared and has continued building over the summer, with sales still benefitting.

Within the last six weeks there have been success stories across the high street. For Topshop, this comes in the form of their £18 studded bralet, sold out in four of six sizes in just over a month. Studding works; ASOS triumphed with their leather-look studded bralet by Hearts & Bows. At £24.99, the garment arrived online on the 3rd August and was out of stock of all five sizes a month later.  Meanwhile New Look‘s girlier Parisian floral bralet at £8 sold out completely in a month.

Cropped tops are firm friends with the midriff trend and they’re on our radar in a big way. While there were 174 new bralet products arriving into global stores we track in the last 90 days, there were 3,333 new crop tops in the same time. They also have a very different price distribution to bralets. The bulk of bralet products at key retailers sit between £12-£16, with a premium range only extending to around £30. Cropped tops show a different story: they appeal to a far broader spread of retailers, their mode price is £60-£100 and the pricing range is much greater.

So what’s sold recently? Nasty Gal have seen fast sales of their $130 Dawn crochet crop top, which arrived online on the 7th August and currently sits out of stock in XS, with only 1 item remaining in two further sizes. Topshop’s £42 embellished cami sold out of all sizes in three weeks of its 10th July arrival. The subsequent late August restock sold out in days. It’s a no-brainer really, but worth noting that across bralets and cropped tops, the sell outs occur in size order, with smallest sizes selling out first, through to the largest sizes last.

Being perfectly positioned to take advantage of top selling Northern Hemisphere trends, Southern Hemisphere retailers with access the right data can ensure their off-sync season offering is on the money. General Pants in Australia have done just that, with a number of midriff-baring successes recently. The $49.50 (AUD) Martika floral crop top by Subtitled sold out of all sizes in a little over a month of its 13th July arrival. This is a trend Australia can expect to see big return from as they go into their Spring/Summer 2012/13.

The final category of midriff exposures is the cutaway dress. This garment has seen the least number of new arrivals in the past 90 days – 140 new products. It hasn’t sold so well, with discounting seen at Topshop, ASOS and River Island on products that arrived in the last two months. It looks like a case of arriving too late in the season; River Island’s £55 floral print cut out prom dress didn’t hit online stores until the 25th July. By the 30th August the price had dropped by 50% and still no sizes see sell through. Southern Hemisphere are capitalising on this, injecting the style at the start of their spring – General Pants’ Lennox collared dress at $129 (AUD) dropped on the 16th August and was sold out by the 29th August. The consumer demand for stomach-baring product is clearly there, but needs to be seasonally appropriate to the customer’s own climate. Floral cutaway dresses in Autumn are not the way to do it.

So how can the Northern Hemisphere keep appealing to customers? Separates are working better for this trend, so buyers and design teams need to consider their range planning and the opportunities this trend opens up within the range. If consumers want cropped tops through winter, they’re going to need higher waistlines on skirts/bottoms in order to still feel the garment is relevant to their environment. Do that and consumers may just make a double spend! And cropped doesn’t have to mean chilly. In the last few weeks there has been an influx of cropped knitwear arriving online from high end designers such as Stella McCartney, Balenciaga and Preen, which cements the trend’s status and will certainly push it through to SS13. Now, to do those sit-ups… 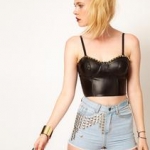 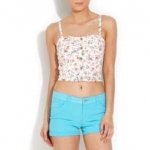 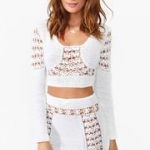 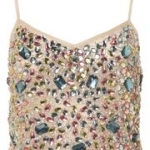 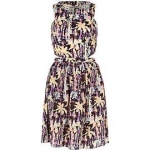 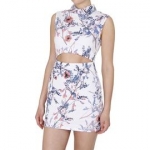