Recent eyewear headlines include the news that Sunglass Hut have teamed up with Google, incorporating Google+ Hangouts to allow shoppers to virtually try on specs. It’s the first time a retailer has used Google’s technology in this way, and shows yet more forward thinking from the market segment that has in recent years brought us Warby Parker and the most exciting of wearable technology. And yet, being tied so closely to the weather can make eyewear a fragile category – Luxottica Group, the world’s largest eyewear group, recently reported net profits sliding by 1.2% in Q1, thanks to Europe’s harsh winter. Thankfully the arrival of spring has lifted things for the group going into Q2. We’ve used our software to analyse what is going on in the eyewear market.

Seasonality of Sunglasses
Naturally, sunglasses are tied to summer weather, but it’s interesting to note the product does not follow a similar cycle to summer clothing. In the past 12 months, April has seen the highest number of new product arrivals, ramping up right from October. It is during the summer months which new arrivals of sunglasses are more erratic – production at this time is hazardous for a market which focuses most of it’s energy in these months – instead the market readies itself ensuring optimum offering and availability ahead of the rush. It’s interesting to note that the new products which arrived in July pushed the average price point up by 17%, signalling that retailers who drop products at this time are confident of the trends they’re backing at high-season, having most likely tested demand earlier in the season.

Discounting around sunglasses also does not behave like other markets – with discount rates low during the normally sales-heavy January and February. Summer discounts occur in August, but as the season ramps up and new product drops increase in March and April, so too do discounts. Not only does this suggest the category is prone to promotional activity, but that shoppers aren’t in the habit of using January sales to purchase sunglasses – retailers wait to clear deadstock when the spring season arrives, selling it consecutively alongside new product. With the ability of e-commerce making it possible to retail to both hemispheres, this offers huge potential in the coming years for eyewear retailers to iron this out and remove some of the risk of having high levels of sale stock alongside new product.

The Big Retailers
So who are the big players in sunglasses retail? Currently, online, Nordstrom has the largest assortment, followed by Farfetch, Macy’s, ASOS and Saks Fifth Avenue. American department stores really dominate this space and are competitive around it. Macy’s for example has a very different discounting strategy to Nordstrom, discounting earlier in the summer and easing off discounts September-November. Nordstrom meanwhile do the opposite, including hard discounting in April when Macy’s barely discount. Nordstrom are aggressive in this category: they upped the number of new sunglasses they brought into stock in April 2014 by 84% compared to April 2013. Meanwhile, Macy’s and Saks both dropped their rate of newness by 24% and 30% respectively.

The price architecture on sunglasses assortment at Nordstrom reflects their competitiveness – competing in size of offering at every main price point of the other big retailers. It is only Farfetch who break away from Nordstrom’s reign at the highest end.

Communicating Product
In a fluctuating economy, sunglasses have been a very useful tool for luxury retailers. They’ve got broad appeal: the relatively accessible price point makes it a good first point of contact for a new shopper to interact with the brand. However, many retailers under-communicate the category, including both Nordstrom and Farfetch. The two biggest retailers barely refer to their sunglasses offering in email newsletters. Brands including Marc Jacobs, Burberry, House of Holland and Michael Kors, have all focused on sunglasses so far in their Spring/Summer email newsletters.

Savvy retailers use sunglasses and accessories in order to generate sales at otherwise quiet times of the month – Topshop’s ‘Guilt Free Goodies’ email on the 24th April was clever timing, after a public holiday weekend and a week before end of month pay days. Likewise, Forever 21, Urban Outfitters and Nasty Gal aren’t afraid to promote the low-cost items at the front of their visual merchandising in order to drive traffic.

What’s Trending
So which styles are selling well? We can look at product-specific data in our Market Analytics software too. There are currently three styles of sunglasses selling well. The first is the wayfarer shapes with a speckled frame. That’s sold swiftly at Gucci’s $245 price point, at Kate Spade’s cat eyed variation for $138 and H&M’s budget friendly leopard print take at $5.95. All styles have sold out and been restocked so far this season. The second current sunglasses trend is for lens effects: for ASOS the River Island $16 ombre lensed glasses have done well, Forever 21’s ‘Cool Girl Glasses’ with blue mirror lenses for $7.92 have sold fast, and Marc by Marc Jacobs’ red-framed $98 mirrored shades at Shopbop only stayed in stock for 12 days. Aviator shades are selling best in menswear, with the classic shaped, metal framed style triumphing. A color analysis of the best-selling styles reveals lilac and pink frames to be the most popular trend colours after the classic browns, neutrals, black and metals.

Want to discover more about deep-level analytics in this category, or any other? Find out more right here. 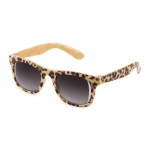 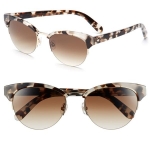 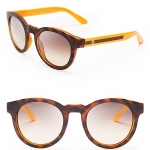