The women’s denim industry means big business: in February, yearly sales were up in the UK by 4.9% to £710.2 million*, with a 9.5% increase in online sales. With cotton prices pushing up the retail cost of denim garments, and their highly durable (and therefore not as seasonally-replaced) nature means denim retailers have to fight hard for a spend.  Just like any other sector of the fashion industry, denim relies on accurate data to forecast the colours, shapes and styles to fulfil consumer demand.

Coloured and patterned denim has been having quite the year, with a steady stream of product updates and celebrity endorsements fuelling consumer sentiment. Of the ten denim Top Movers at ASOS in June, two were coloured and two printed. Same story at Topshop, where four of the ten denim garments were coloured, one dip-dye and one striped.

We’ve looked back over the last four weeks’ best-selling women’s fashion denim to pick out the key trends globally, in real-time. Better still, we can see exactly where those trends came from and how far back savvy retailers should have anticipated them. So, the big four!

1. Floral denim
Floral print is the month’s runaway success for denim, having seen fast sell-outs across a wide spread of price points. The healthy two-tier price structure we expect to see for a steady trend can be seen in the price distribution at the garment’s top retailers: an accessible highstreet access point (in this case £14-£48) and a more aspirational designer product (around £250 for floral denims).

Quick sell outs were seen in Urban Outfitter’s Floral Landscape jean by Insight, which arrived on the retailer’s US website on the 15th August at $89 and was sold out just two days later. In the UK, Lulu’s Blossom and Jetsam ankle jeans at £42 sold out their three sizes in one week. Branded versions have sold particularly well – a good sign that there is still plenty of room for this trend to grow over the coming months. At Net-a-Porter, success came in the form of Mother’s £305 floral print skinny. They arrived online on the 9th August and are already out of stock in five sizes. Not bad going given their considerable price point! Joe’s Jeans AUD $269.99 florals at Glue Store are a similar story, having dropped on the 28th July and now out of stock in two sizes.

So, when could retailers with the right data have preempted this trend? Urban Outfitter’s Beanpole skinny jeans should have sent out a strong message. Arriving in store for $98 at the end of August in 2011, they sold out across all sizes within a week. Their subsequent restock mid-September was cleared within 9 days.

With 696 new online arrivals globally in the last three months, this trend is still in early bloom.

2. Textured/paint effect prints
Paint effect denim is new to the jean scene. Ombré, paint splattered and tie dye denim have all sold well in the last month. HELMUT’s Bar Print skinny jeans for $195 at Shopbop only arrived in store on the 20th August and are currently out of stock in five sizes. Karen Millen also saw success with their £75 texture print skinnies at ASOS, which landed in store on the 1st August and are now out of stock in three of their six sizes.

Rag & Bone have dropped several styles of ombré skinnies this month and both Nasty Gal and Cheap Monday at Lulu’s have sold out of one size of their black Ombré skinnies which both arrived instore on the 21st August.

Being a new style, how could retailers have preempted this trend’s arrival? The catwalks have been strongly hinting since last September. House of Holland and Danielle Scutt both showed paint effect denim in London for SS12 and Versus and Vivienne Westwood picked up the baton, taking the style through to AW12/13. We’ve been reporting on paint effect denim at Bread & Butter since AW11/12.

3. The shades
So, onto colour. Which are the hottest shades right now? Pastel tones may have been hot property in early Spring, but the two shades selling best this month, globally, are red and green. The Kate Middleton effect may be partially responsible (having visited the Olympic park in red cropped skinnies back in March), but more likely is that HRH has latched onto an already sky-high trend.

Dark red jeans have sold well for White Stuff at John Lewis. Their £50 Berry Stain slim jeans arrived instore on the 7th August and they are now out of stock in two sizes, and low in stock in three more. Oasis’s deep red coated version arrived online on the 16th of August and are now out of stock in three of five sizes. Red denim was selling well one year ago too, with J Brand’s £170 cherry mid-rise at Cusp selling out of the majority of sizes within weeks of their September 2011 arrival, and two months for full sell through. High street retailers could have looked to the success of Moto’s red items last year too and considered a slight shift in shade to rerun them for similar luck a year on.

Green shades have sold well for ASOS with their Curve range – their £28 skinny is sold out in three of five sizes having only arrived on the 4th August. Hilfiger Denim’s £90 teal jeans for Next have sold out in one size after being online for less than two weeks. Green denim should have been anticipated  by buyers and design teams following the success of Rag & Bone’s £165 kelly green pair at Shopbop last June and New Look’s swift selling green envy in July 2011.

4. Metallics
Blame Rhi Rhi – adding some bling to the shop floor is an array of swiftly selling metallic and shimmer coated jeans. Not for the shy-hearted, Victoria’s Secret’s $79.50 metallic jegging sold out in silver within a week of arriving instore. Forever 21’s shiny coated skinnies arrived online on the 3rd August at £18.75 and only remain instock in two of the seven sizes. Representing the designer price point of this garment are the Faith Connexion £220 gold metallic-coated skinnies at Net-a-Porter. They arrived online on the 25th August and sold out of one of their sizes within just two days!

This trend could be seen developing when Topshop’s metallic jeans from August 2011 flew out in both silver and gold (a month to complete sell out for gold, two months for silver). Siwy’s $230 distressed metal jeans at Shopbop in September 2011 sold out and were restocked in November.

The top four trends in coloured denim all had their precursors and advance warnings. With access to the correct data, clever brands and retailers have been able to tap into the emerging styles and are now sailing into the new season with the right product on offer. It’s not rocket science. It’s retail science. 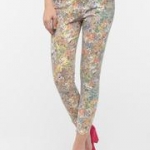 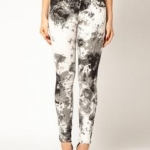 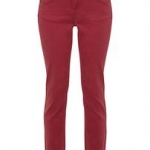 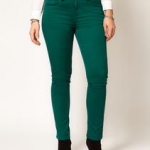 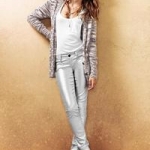 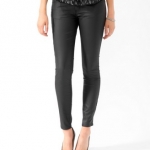 *According to Kantar Worldpanel Fashion