As a print perennial, the polka is always on the radar, but until now, hasn’t experienced such a strong sartorial moment since a certain yellow bikini hit the radio waves in 1960. The print that says ‘I’m a bag of fun!’ or ‘Don’t challenge me, I’m breezy!’ has stepped into the spotlight and is commanding attention on a global scale. People went potty for the dotty with the showing of AW11/12 collections, where a large number of collections caught the rash. David Koma’s bespotted leather pencil skirts and nude body con dresses were paired with large scale photographic prints, whilst Diane Von Furstenberg layered dot on spot in a grown-up skirt suit and matchy polo neck.

But the real stars of the the season included Marc Jacobs’ fetish-meets-ladylike offerings where latex combined with lace and polka dots to pack some punch, and then there was Stella. The fashion-McCartney came up trumps with her sleek and womanly collection, featuring figure hugging evening dresses with sheer polka dot panels. Stylists sitting front row were straight on the line to book the dresses out and editorial coverage for the collection came thick and fast.

A month later, Kate Winslet stepped out to the premiere of Mildred Pierce looking sizzling in one of the more iconic looks from the collection, launching it into the stratosphere. Jane Fonda and Liv Tyler soon put in their own performances but Winslet had done the legwork.

And here begins the polka dot revolution! Polka props to Kate Winslet for getting in first! https://bit.ly/gJBO4zless than a minute ago via bitly

Retailers have been quick to respond and were heavily inspired by the McCartney original it seems. Warehouse dropped a polka-mesh sleeved dress complete with peplum detail on the 10th of August, priced at £60. This was quickly followed on the 16th by ASOS’s £30 version, a slinky one-shouldered number, yeah you got it, complete with spot mesh paneling. On the 25th August, two more dresses dropped; one being Miss Selfridge’s £39 sleeveless bodycon version and the other? The Stella McCartney original. The ‘Lucia’ dress priced at £1,285 dropped into Net-a-Porter and sold out within a day of each size landing. It still stands as being sold out. Incidentally, none of the versions ‘inspired’ by it have yet sold out, but with the far lower price points and in-turn higher volumes, this can be expected. With Julien Macdonald for Debenhams dropping a version five days ago, perhaps his £50 mini dress with designer associations will provide champagne for those on a lemonade budget.

The spot-mesh dress is sure to fly off the shelves as we proceed into party season, and for retailers not yet in on the action, they would be wise to act swiftly. Be astute too! With the market awash with variants, it’s the details that stand out, as with Warehouse’s peplumed creation.

Elsewhere, with the influx of spots on the highstreet, the strength of the spot is proving its worth and retailers are enjoying a number of sellouts. Monochromatic versions seem to be the top trump and tread the careful line between frivolity and sophistication when presented in lustrous fabrics. New Look have enjoyed success with their £22.99 Polka Tea Dress, which dropped in store on the 30th July and was sold out in all three colourways within two weeks. Zara launched a £29.99 polka dot blouse at the start of August. It sold out across all four sizes in seven days, was restocked and now is only left in one size. Power to the polka! 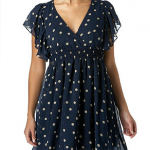 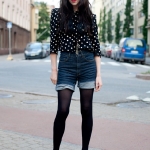 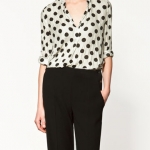 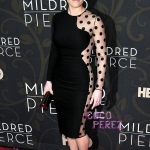 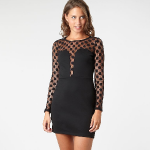 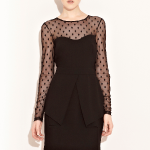