The sun may not have set on 2016 just yet, but its biggest retail success stories are already set in stone. So let’s dig in. We’ve analyzed the last 12 months’ worth of data spanning the U.S. and U.K. markets to pinpoint the biggest trends of 2016 across men’s, women’s and childrenswear. Here they are…

The reigning 2015 trend had another marquee year for retailers. Just how big was it? Huge. Over the last 12 months, more than 61,000 bombers for men, women and children were launched in the U.S. and U.K. alone. Even Google took note, recognizing the bomber as the most-searched trend of 2016.

Yoox finished the year as the trend’s most-stocked retailer with 9,400 different styles. It was followed by Farfetch, ASOS, House of Fraser and Walmart. 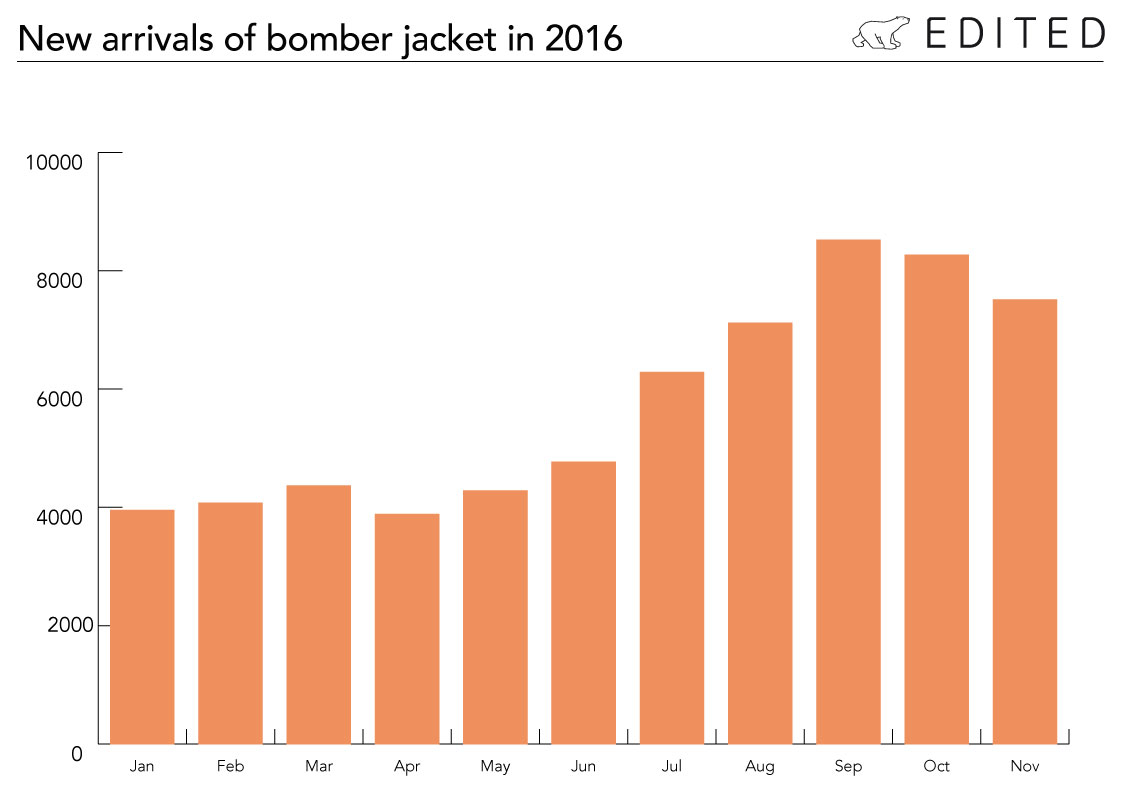 Let’s see how the trend performed across men’s, women’s and children’s assortments in 2016.

In terms of performance, 3.8% of all men’s bombers in the U.S. and U.K. sold out at full price and 4.9% of all styles were replenished at least once.

That’s a sure sign that the women’s trend is further along in its evolution as a mass market trend than its menswear counterpart. Further proof is the number of overall styles launched – at 24,000 across the two markets it fell about 8,000 short of menswear.

Women’s bomber jackets did however perform strong with 6.2% of all styles selling out at full price and 7.6% of all styles receiving one or more replenishments – both larger figures that in menswear.

Performance kept pace with adult totals with 4.5% of options selling out at full price and 5.2% of all of them being replenished.

If you stepped outside at least once this year, this one is no great surprise. The figures behind it however, are pretty striking.

More than 331,000 new pairs of men’s, women’s and kids’ sneakers came online in 2016. What makes that really interesting is that more than 240,000 of them retailed outside the sportswear category. Of course many were sports-themed, but their primary purpose remained fashion, not performance. 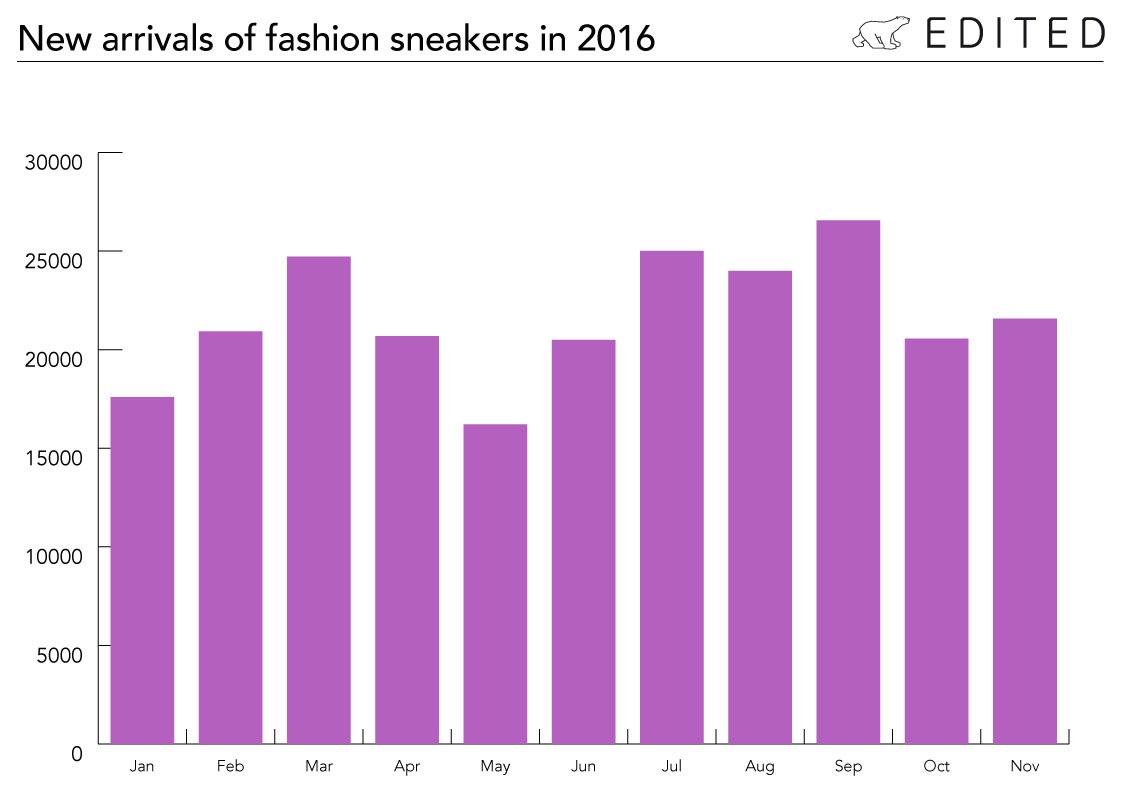 Let’s dig a little further and see how well they performed.

Looking at U.K. and U.S. womenswear as a whole, 4.9% of all new-in items sold out at full price this year and 3.7% of everything was replenished at least once. Within all that activity, here are the three trends that worked best.

Trend 3: Off the shoulder dresses

Consistent with the trend’s strong mass market backing, the average price fell slightly compared to 2015 – ending the year at $67 down from $69.99.

The most stocked retailers were ASOS (it had nearly 700), Nordstrom, Shopbop, Neiman Marcus and Boohoo.

Interesting to note is that off the shoulder dresses performed better this year than off the shoulder tops, which ended 2016 with more new arrivals (24,000) but less full priced sell outs (7.6%) and fewer replenishments (10.2%).

Jumpsuits more than doubled the average womenswear replenishment rate for 2016, racking up 10.6%. Over the year the online market had roughly 52,000 unique jumpsuit launches, with 7% of them selling out at full price. Average price saw a slight increase over 2015, sliding up to $63.53 from $61.86.

Most stocked retailers: ASOS (it had 2,700 alone), House of Fraser, Boohoo, Walmart and Zalando.

More than 34,700 slip/cami dresses arrived online this year. Six percent of them sold out at full price and 6.7% of them were replenished. Even more notable was the considerable increase in average price, up almost ten dollars on the year, from $64.99 to $74.71.

Ripped jeans styles in 2016 had much lower levels of newness but ended the year impressively, with a 9.6% sell out rate and 10% replenishment.

This year 3.7% of all new-in menswear sold out at full price across the U.S. and U.K. markets while 4.4% of everything was replenished at least once. A lot worked this year, but here are the two trends that worked better than the rest of them.

More than 21,000 backpacks arrived online this year. Though their one-size-suits-all characteristic kept replenishment rates lower than the other trends on this list, 7% of all new arrivals sold out at full price. Average priced remained within a dollar of the 2015 average, dropping slightly to $99.85 from $100.03.

This year jersey shorts accounted for 19% of all full-price sell outs within the entire shorts category. More than 10,700 pairs came online, with 4.7% selling out at full price (beating the menswear average) and reaching an 11.3% replenishment rate. Average price was up as well, though slightly, to $36.49 from $34.97.

Unlike men’s and womenswear, which both exceeded overall full-priced sellouts in excess of 3.5%, only 1.4% of new-in childrenswear sold out at full price this year. Not bad considering parents have long been full-price averse when it comes to buying for growing bodies. The overall replenishment rate ended the year at 3.9% overall. Here’s what did the best.

Driven in part by the Mini Me trend that revitalized childrenswear this year, over 13,000 pairs of sweatpants arrived online between the girls’ and boys’ categories. The mass market embraced the trend, pushing the average price point below the 2015 average of $19.54 to $18.15.

They did well too; 5.3% of new-in sweatpants sold out at full price, with 8% seeing replenishment (double the childrenswear average).

Not all childrenswear trends were adult-led plays on the Mini Me. Kids will be kids; and there’s no better way for them to do it than in licensed T-shirts. More than 7,400 licensed T-shirts came online in the U.S. and U.K. this year featuring a cast of new and familiar faces.

How’d they do? Very well. Six percent sold out at full price and 7.4% were replenished one or more times. Sweetening the deal for retailers is an average price that increased from $9.99 in 2015 to $13.97 in 2016. Next year expect big things from the likes of Minions, Harry Potter (and the fantastic beasts), Frozen, Marvel and Star Wars.

That’s all we’ve got for now! Questions? Let us hear them at hello@edited.com.