In the final part of this week’s denim special, we’re looking at color trends in women’s jeans. Four years ago, the surge of demand in colored denim was a huge boon for the denim industry, a big success across both genders, and in childrenswear, which reaffirmed denim’s place within the high-trend market. Following that were the neon shades popular in both women’s and kids’ denim.

More recently, attention seems to have shifted away from unusual color and into focus on the washes of traditional blues, in the acid wash trend, and new looser fit shapes. But does analysis of new arrivals detect new waves of color on way?

The colorwheel shown here depicts each and every shade of color in women’s jeans arriving online at global retailers in the last three months. It gives fascinating insight into the balance between black, indigo, pale blue and grey denim. Compared to the same period in 2013, this year has seen the most growth in the pale blue segment. Black and blue shades are fairly evenly weighted, though clearly there’s more variance in blue. 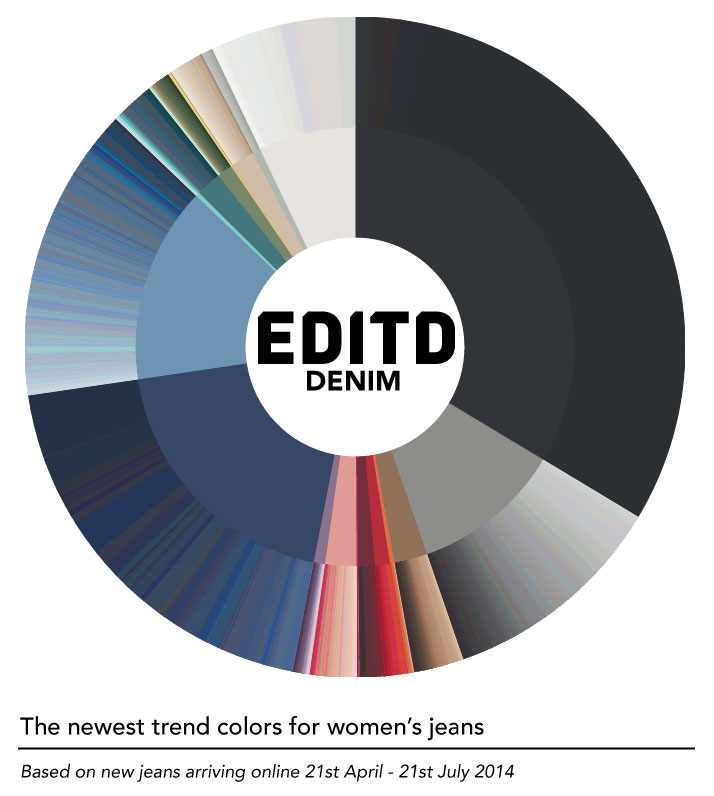 The retail success of the pink trend

The colorwheel throws up some interesting areas of trend color: the pale pink in the colorwheel was retailing in 2013, but the average price of a pair of pink jeans has risen from $87 to $122, suggesting a climb in trend status for this color. Current pink jeans retailing are taking an average of 22 days to sell out – compared to an average of 49 days for greens and 57 for red shades. Look out for this one retailers.