They were the trend that was sniffed at, mocked and ridiculed by fashion press: they weren’t supposed to stick around. Prada‘s lurid brogue flatforms were an instant hit with bloggers following the SS11 shows and a flurry of lookalikes hit stores, combining brothel creeper styling, brogue detailing and platform soles.  They were the kooky hit of last summer but one year on, what are they doing still kicking around? Can there really still be money to be made?

Sentiment towards flatforms is interesting – they completely polarise social opinion, with 39% of online conversation towards them being positive. Yet their agitators are very vocal, “People that wear flatforms are going straight to hell”! Over the last twelve months, sentiment towards the trend has undulated, at its most positive last July, but with dramatic peaks and troughs throughout the year. Although sentiment this season isn’t the highest it has been, what has grown very steadily is the number of people talking about the controversial footwear; with a 420% increase in the number of people discussing the trend currently compared to last August.

So the footwear may not be the most delicate of options, but that doesn’t seem to be the reason for the style’s polarising effect as sentiment towards fashion’s staple stiletto is only 24% positive and sandals only 23%. The love/hate battle for flatforms is working out for the style: more people talking, with fans especially ardent in their approval. The style has had its fair share of influential celebrity endorsement too, with Rihanna, Jessie J, Elle Fanning and Miley Cyrus all parading their flat-footed wares. Hype has also been built by House of Holland, who recently teamed up with coolsters Superga to release a range of their classic sneakers given a high-rise sole.

But we don’t deem that to be a trend if customers aren’t parting with their cash. Is the style actually selling?

Looking at recent products from a cross section of retailers and brands, from fast fashion to designer, we can assess a trend across the market. River Island bought into the trend with confidence, having dropped 30 different flatform styles since February. For summer, their strapped flatform sandals retailing through ASOS were priced at £30 and arrived online mid-May. They had sold out, without discounting, by the end of July. Their latest seasonal update comes in the form of creepers and plimsolls and appears to be selling faster than the summer styles. Their grey animal print flatform plimsolls priced at £35 arrived online on the 20th July and were out of stock just 11 days later.

At mid-highstreet sits the £95 Jeffery Campbell ‘Stingers’ at Office. They incorporate some mean-looking materials; spike studded toes and perspex uppers. They arrived instore on the 23rd  June and were sold out by the end of July in all sizes, bar one. Quite a strong take on the trend, which worked well for the brand and its retailer. At designer level, Michael Kors‘ $135 flatform wedges at Bloomingdales sold out of six sizes in one month and all sizes within two months.

For any brand or retailer contemplating the style, it is well worth looking at its price distribution. Compared to other popular styles such as stilettos or ankle boots, the price spread of flatforms at the retailers who backed it the most, is relatively low. Zappos and ASOS both put investment in the £114+ price level, whereas the bulk of the flatform market sits around £16-£40. This is a fast fashion, high-street trend and divided consumer interest supports this. In contrast, both stilettos and ankle boots are well represented at highstreet price and designer levels (for ankle boots around £375 and stilettos £472). This is seen in their seasonal appearances and longevity.

What’s the prognosis for flatforms? In the last three months (May-Aug 2012), 189 pairs of flatforms have landed at online stores we monitor in our commerical database. You could compare that to the three month period before it (Feb-May 2012) when 232 products came into store, however, that is a stage in the fashion calander when stores are flooded with new season styles. It will be the next month that will be critical in the lifespan of the flatform, as Autumn styles continue to arrive instore. Will retailers have latched onto the steady growth in consumer chatter we traced and will they have prepared stock to soak up consumer interest? We think so: when we visited Bread & Butter industry tradeshow in Berlin last month, we spotted flatform styles for future seasons from Mora Mora, Coolway and Diadora. Considering the price data already discussed this trend is best suited to, and will stay, on the highstreet.

However, the bigger footwear picture is interesting: flatforms may have sowed the seeds for a whole swathe of new ‘ugly’ styles. The catwalks are awash with foot-baring clear plastic fabrications, fiercely studded uppers and bizarre moulded heels. And then there’s Marc Jacobs‘ buckled pilgrim creations from AW12/13 ready-to-wear… that’s if you’re sure you are ready to wear them. 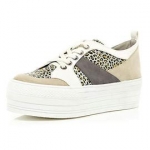 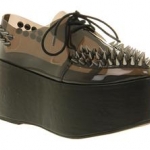 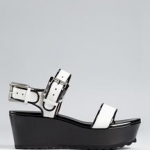 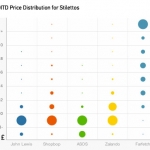 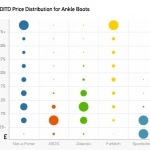 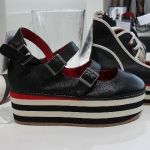