Few garments hold as much mysticism, luxury and exoticism as the kimono. And few garments have the longevity either. Dating back to the 5th century this is a garment with a serious back catalogue and yet fashion just can’t shake its allure. Orientalism has been brought to the fore in the past few seasons, first cropping up in its silken textures and jewel colours in the Louis Vuitton SS11 collection. At the time this could have been interpreted as a passing fetish, a tantalising glimpse of colour, but one that would pass without much retail success. However, 10 months on it looks as though orientalism is here to stay.

We’ve been looking east with avid interest, back to SS11 where Vuitton, along with Dries van Noten and Marc Jacobs first paraded their geisha garms, their models obi-waisted and coiffes lacquered. Then came Resort 2012, where Preen got on board with their wide sleeved kimono shirts and antiqued floral prints. In the meantime, an array of celebrities have dipped their toe in the eastern pool, from Nicole Richie and the Olsen twins, to Reese Witherspoon and Oliva Palermo. Then yesterday, Armani Privé showed their Couture AW11 collection in Paris and lo and behold, the kimono steps forth again. Giorgio Armani has been supporting a UNESCO program helping child victims of the Japan quake in March and this deep personal connection shone through in his latest wares.

So the evidence is there in the collections, but is it selling? Kimono-styled pieces are retailing across a broad spectrum of price points, from the £6,595 Alexander McQueen silk-jacquard kimono cape which was restocked three times by Net-a-Porter and is now discontinued, to the £30 Lexi Floral chiffon at Boohoo, which has been restocked four times in large since it dropped at the start of June and three times in all other sizes. Mid-range pieces are also celebrating phenomenal success. Topshop dropped their £180 beaded kimono by Boutique at the end of May and within twelve days it was sold out across all five sizes. They have now restocked sizes 12 and 14 and we await similar success second time round. ASOS Premium’s offering, priced at £120 has sold out three times in size 16 and is awaiting restock. 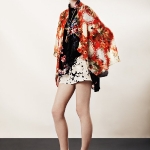 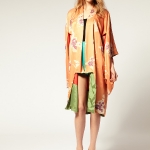 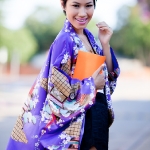 Using our extensive tracking, we are able to see that across the market, the larger sizes of kimono styles are selling out fastest. Retailers take note, apply a similar mind-set to that of ASOS co-founder Nick Robertson, who loved maxi dresses as they ‘hardly ever get returned’, the kimono is a fantastic garment for selling online as it erases sizing issues. 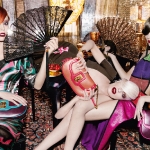 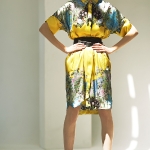 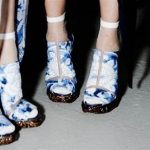 In the past week, key styles have dropped across the price range for the retailers who are in on the action. The news is that consumers are translating their online discussion of this trend into purchases. If we look at how people are discussing the kimono online, we can see spikes in interest when SS11 first showed and when Topshop first dropped their versions. We can also see that in the past month, sentiment towards the style has averaged but more people are talking about kimonos than ever before, suggesting the garment is now in the collective conscience. Our advice; make haste and get onboard the oriental express. Next stop, retail success.