Economic pressure and the spread of the mass market has given premium denim a hard time in recent years. Earlier this month, California-based True Religion sold for $835 million to TowerBrook investment management firm; despite their revenues recently rising, their profitability had shrunk. They had lost business to the more accessibly priced 7 For All Mankind, who were absorbed into US apparel giants, V.F. Corporation. VF recently reported that profits were up 25%. Meanwhile, due to the permanency of the skinny jean trend, there has been little excitement in the market, with the only relief for premium coming from the 2011 arrival of coloured denim.

But in the last quarter, things have been shaken up within the denim sector. It’s an interesting industry in terms of trend, because premium really prescribes the pace. Finally we’re seeing some contenders to the skinny trend come through. A renewed interest in traditional shapes is backed by reports from the vintage industry that Levis classic 501’s are flying out of stock. So what are the new arrivals and product opportunities within the denim scene that are shifting stock fastest?

White denim
With 696 on the market products currently being tracked by our software, white jeans’ association with ageing rockstars and Europop is being rewritten. The retailers stocking white denim the most are Macy’s, Bloomingdales and Shopbop and 7 For All Mankind is the most stocked brand doing white denim. On average, it’s taking 86 days for white jeans to sell out and 18% of styles do sell out. The average price for a pair of white jeans is £75 – a good sign that this style is still sitting comfortably in the premium bracket and therefore young in it’s trend lifespan.

J Brand’s $172 Blanc Mid-Rise Skinny Jeans have sold out twice at Neiman Marcus since they first arrived on the 11th March.

Cropped jeans
Cropped jeans have also emerged, perhaps in response to the prevalence of flat shoe styles, and are a great way for retailers to update a skinny denim style. This is still a well-priced premium trend, with the average price point across the 1,270 currently on the market and in our commercial database, being £78. The price architecture chart to the right indicates that the style is confidently present around both high street and premium price points – a reliable sign that this will be a lasting commercial trend.

In fact, they’re selling through faster than white jeans – taking an average of 79 days to sell out. Macy’s is also the biggest stockist of this trend, followed by Neiman Marcus and Cusp. Currently, both white and cropped jeans have 23% of their assortment on discount – however that’s not abnormal at this stage in the season . Fast product movement can still be seen, as with the $78 Free People cropped jeans at Shopbop which arrived in store on the 2nd May. Six of eight sizes were sold out by the 10th May.

Relaxed fit
Relaxed fit or “boyfriend” jeans are getting the most attention from retailers and the media. Our software holds data on 565 products presently on the market, with an average price point a high £85. The style has a slower average sell-through than cropped or white jeans, being 87 days, but a greater proportion of styles are restocked. Zalando, Neiman Marcus and Shopbop are all stocking the trend, with G-Star’s styles being the most-stocked brand. Bloomingdale’s BLANKNYC $88 Flavor Savor jeans first arrived in store on the 29th March and sold out by the 10th April. A subsequent restock has also sold out of five of seven sizes.

Dungarees
Dungarees have suddenly descended upon the high street, but astute retailers would have seen them coming from afar. It’s a style we’ve been watching since Alexa Chung and other street style starlets started experimenting with the workwear in 2009 and was then picked up by D-Squared2. However, fresh to retail, the average price of the garment is £49 and considering the amount of fabric used in them, this places the trend within the mass market. They’re selling the fastest of all the trends covered here, at an average of 54 days and are most-backed by ASOS, Boohoo and Topshop. They also have the least discounting, highlighting that this trend is red hot; act now if you can manufacture within three months!

Full-length overalls, as seen in Zara‘s £39.99 version, are a bold take on the trend, but the safe money lies in pinafore dresses or shorts.

Shorts
Denim shorts are the trend with the lowest average price, of just £33. In the price architecture chart (below) you’ll notice the bulk of the product sits around the lower end of the pricing tier. They’re also the style with the most products currently on the market – 1,908 in our database. On average, the style takes 72 days to sell through, with Zalando, Boohoo and Shopbop as the retailers with the largest assortments.

The denim shorts styles selling well are dip and tie-dye prints; for Topshop in their Moto £28 peach dip dye hotpants and the £50 Ragged Priest tie-dye shorts they stock.

Maternity jeans
Lastly, our data highlights the speed with which maternity jeans are selling online. A comfortable and practical style for pregnant women, this product makes good sense for a retailer to back. The price point is low at an average of £34, befitting of their 6 month usage! Maternity jeans have the highest restock level and highest sell-through rate of all the denim trends covered here, and are doing well for their most confident backers; New Look, Zalando and ASOS. JoJo Maman Bébé‘s £29 straight leg maternity jeans at Zalando, have sold out in some sizes three times since arriving on 19th March.

Other notable fast selling styles are heavy distressing, pastel colours and tie-dye prints on jeans and shorts. We’ve not forgotten about the boys either! Selling well in menswear currently (apart from those 501’s) is raw denim. At premium price points, styles of untreated indigo threads have sold well from APC, Edwin, Levis and Naked and Famous denim. In the mass market, ASOS has done well from this style. Extreme bleached denim is an emerging menswear denim trend, as seem in the £245 PRPS version at Selfridges.

We’re at Premiere Vision checking out future denim today, so we’ll fill you in tomorrow on what’s next on the denim roadmap! 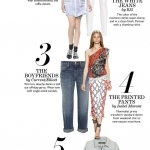 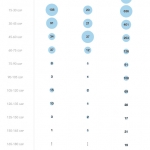 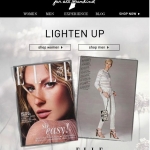