Having been backed by armies of designers at each of AW 13/14’s fashion weeks, there is no disputing that checks and plaids are the print of the season. They’ve got some weighty consumer interest too with 78,780 online mentions during February. In fact, for a trend which has bubbled up from street level, that’s the perfect recipe for success; tapping into positive consumer sentiment to float the trend to high end glory, with the aid of safety in numbers. So let’s see how that happened.

1. Where the trend came from
With their workwear roots, plaids and checks are as tied up in street culture as denim.To punks, tartan became the uniform of their rebellious army. Plaids were then picked up by the grunge movement for their androgynous connotations and causal appearance, Nirvana’s Kurt Cobain is the oft-cited poster boy for the flannel shirt – both subcultures reinforcing plaids with some cool attitude.

With the rise in popularity of thrift shopping, and the 90s falling onto the radar of bright young things who weren’t scarred by the decade’s first visit, grunge styles fell back under fashion’s gaze. Five years ago, you couldn’t move in London’s east end for Doc Martins, oversized shirts and parkas. Fast-forward to AW 13/14 and we have the likes of Saint Laurent and 3.1 Philip Lim paying homage to the street scene, but with a hefty price tag.

Timing worked well; it’s a print whose ascent to high end has been helped by the re-appreciation of all things heritage. Serious crowd-swaying brands like Burberry revisiting heritage fabrics and traditional processe updated tartans and checked woollens to contemporary status. Fitting in with street referencing, and being linked to visuals the luxury customer understood, has aided the swift adoption of the trend.

2. Growth in the trend
So that’s the background, but let’s return to the data, which draws a more reliable picture of the trends adoption and growth. Looking back to the three month period marking the arrival of SS12 retail stock (Feb-May 2012), our commercial database detected 3,806 new checked or tartan products arriving online. The average price was £30.53 and took an average of 34 days for a style to reach sell-out status. In the period, 10.3% of styles were restocked and 58.5% of plaid or checked products saw discounting.

Fast forward to the three months when AW 12/13 product is arriving in store (Sept-Dec 2012) and there were 5,024 new products – a rise of 32%. The average price of garments shifted dramatically too, rising 48% to £45.25, bolstered by increased brand level adoption. Products were reaching sell-out faster, after an average of 26 days, restocks rose by 2.3% and discounting dropped 2.1%. It would seem all is looking rosy for the trend!

3. What’s selling now
And what’s the latest for retail? The savvy high street is cashing in on this trend. Topshop Boutique’s SS13 £150 silk check dress sold out of all sizes the day it came into stock (21st Feb). ASOS launched a similar dress priced at £55 four days later, mopping up the interest and selling through in a day, too. They’ve also seen success with an £88 bright yellow plaid biker jacket by Tripp NYC, which has been restocked twice since its launch mid-January. In the US, see by Chloé’s $395 tartan jeans at Madewell saw sell-through on all 5 sizes in a day on 18th Feb.

They’re all very striking garments (and there’s more; a checkerboard mini dress at Nasty Gal, a bold tartan sweater for men by Carven, an asymmetric, zippered plaid skirt at Urban Outfitters…) but what’s most interesting is what’s not selling. Sorry Kurt, but those plaid shirts are repeatedly seeing discount – at ASOS alone Penfield, Levis and Hearts & Bows branded flannel shirts have all been discounted this year. Luxury’s involvement in the trend has pushed the average consumer’s awareness and expectations forwards. With this trend, it’s best to go for bold palettes, unusual fabrics and unexpected cuts – yet more evidence that the consumer is just as clued up as front-rowers! 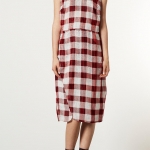 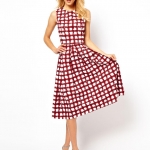 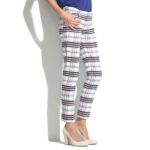