This season, sweaters are high in trend currency with magazine editors, street style bloggers and celebrities declaring, or wearing, their support. From high street retailers, to luxury brands, the simple jumper shape has taken hold, becoming a focus for Fall 2013 knit collections. What a fickle fiend the fashion world is! It wasn’t so long ago we were all crazy for cardigans, was it? The cardigan used to be the default knitwear, ideal for throwing over tees and worn with skinny jeans. So when, and why, did the switch occur? And is the sweater here to stay? Enter the data.

There’s little doubt the sweater is a mammoth trend currently, having received 134,200 online mentions from fashion’s influencers in the last three months. That’s 112% more than cardigans in the same time frame. Consumers are clearly dotty for the jumper shape, but why has the sportswear basic leapt to fashion status?

The love affair with the sweater began when super-luxury brand Givenchy playfully included a Rottweiler print jumper in their Fall 2011 collection. Street style bloggers and celebs (including Kanye, Rihanna and Liv Tyler) went crazy for the sweater, hyping the product so that its arrival into stores were a swift men’s and womenswear success. In fact, it continues to be reworked by the brand, with Barney’s taking pre-orders on a $2,995 sheer-sleeved version of the sweater due to arrive in February 2014! It worked so well because the most luxe of high-fashion brands referenced the grimiest of street culture. The timing too was impeccable; just as the frippery of the high-end seemed reckless in the face of global recession. Uniform dressing and streetwear influences rocketed.

From there the style gained pace, bolstered further by Kenzo’s tiger-faced sweater for Fall 2012. The brand, undergoing a uber-cool overhaul from Opening Ceremony, reached out to an entirely new consumer, spiralling to cult status amongst bloggers. Its appeal was too tempting for retailers to avoid (in fact, there are still 80 ‘tiger sweaters’ on the market), and the sweater floodgates were opened.

The current commercial status of the sweater is strong, with 16,646 womenswear sweaters (and 6,991 for men) on the market at time of writing, compared to 9,418 cardigans (3,015 for men). The garments’ respective size of offering is reflected in our latest knitwear Top Mover report too, which looks at the fastest online selling products, which received no discounting, during the past month. There are twice as many sweaters in the Top Mover report as there are cardigans. Successful lines last month included ASOS’s £30 skeleton print sweater, DKNY’s £170 colour-block sweater and Topshop’s £38 hexagonal quilt sweater.

Topshop have given greater emphasis to their current range of sweaters, with near double garment styles currently offered by them: 37 sweater styles to cardigan’s 19. Isabel Marant, or Queen of the Trends as some refer to her, agrees with that product ratio too. Her much-lauded collection for H&M, which launches today, includes 2 cardigans and 4 sweaters.

Commercial data suggests that’s the right decision, with 42.3% of cardigans currently on the market being discounted compared to sweater’s 38.5% (which may not sound like a huge amount, but any retailer will know that’s a critical 3.2% difference). Sweaters are selling out, on average, 4 days faster than cardigans and also being restocked on average 4 days faster. What’s more, the average price of sweaters sits at £250, whilst cardigans are £212.

So when exactly did the shift occur? The average price of successful cardigans (sold out at full price) has fallen by 18% so far in 2013, compared to 2012. Meanwhile, successful sweaters have grown in average price by 2.3%. We can pinpoint even more acutely when cardigans were shunted – in 2011, the sweater’s predominant market was the mass market whereas currently the largest number of sweaters are in the premium market, reflecting the designer backing. That change occurred during August-November 2012, when Fall 2012 stock came online. During the same period, cardigans dropped from being predominantly a premium priced product, to a mass market product; evidence that industry-leading buyers had moved away from their faithful style.

But just as the sports luxe theme is evolving, so too is the sweater’s stronghold. SS14 shows displayed renewed interest in the cardigan, in cropped and oversized forms from Nicholas K, Michael Kors, Sonia Rykiel and Paul & Joe. More tellingly, the sweater’s biggest backers, Givenchy and Kenzo, haven’t included a single style in their SS14 collections. Knowing that their loyal customers are by now likely to own one of their sweaters, the brands have moved the story on. Mainstream retail, although able to access a much broader customer base, should follow suit in order to capitalise on the trend-thirsty spend.

But perhaps it is Burberry who have made the wisest move. Their SS14 collection balanced numbers of cardigans and sweaters, its neat knit sweaters layered under sweeping cardigans (even coatigans perhaps?). In a season known for its unpredictable weather, this is smart on two fronts: repackaging the cardigan as an outerwear garment, thus increasing its price point and styling it with a sweater, optimising their chances of a double knitwear spend! With a carefully calculated algorithm taking into account the pricing adjustments, market segmentation, consumer mentions and product numbers, EDITD customers will be the first to know when the time is right to switch! 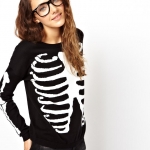 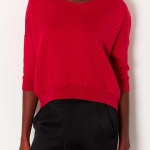 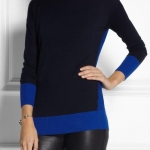