Last week, we revealed the top 5 brands at Bread & Butter, Europe’s largest street and youth wear trade event. The event placed denim at the front of many international buyer’s minds. For that reason, we’re checking in on commercial data around the tumultuous segment. Today, we reveal the biggest global denim retailers; we look at the size, price cycles and timing of jeans currently on the market.

Zalando are the largest retailers of denim worldwide, followed by Farfetch, ASOS, House of Fraser and Nordstrom. Zalando, House of Fraser and ASOS have similar entry and exit price points – entering the market around $10 and exiting no higher than $700 (Zalando). Their average price points all lie within $20 of the $100 mark. ASOS have a much higher sell through rate however – 17.% of their current denim offering has sold out in its life cycle at the retailer. Nordstrom, who have a high exit price of $1,655, are good at replenishing on success – 16% of their current offering has been replenished.

Levi’s are the world’s most-stocked denim brand, with the highest number of options currently available at retailers worldwide. They also have the lowest discount rate of the top 5 denim brands – just 39.1% of Levi’s products at online retailers are discounted.

The mass market is the largest segment for jeans

Womenswear dominates denim, with 53% of jeans currently retailing within the women’s market. Drilling down into pricing and brands shows, as expected, the mass market is the largest segment, totaling 63% of jeans retailing worldwide. The premium market outweighs the value market. 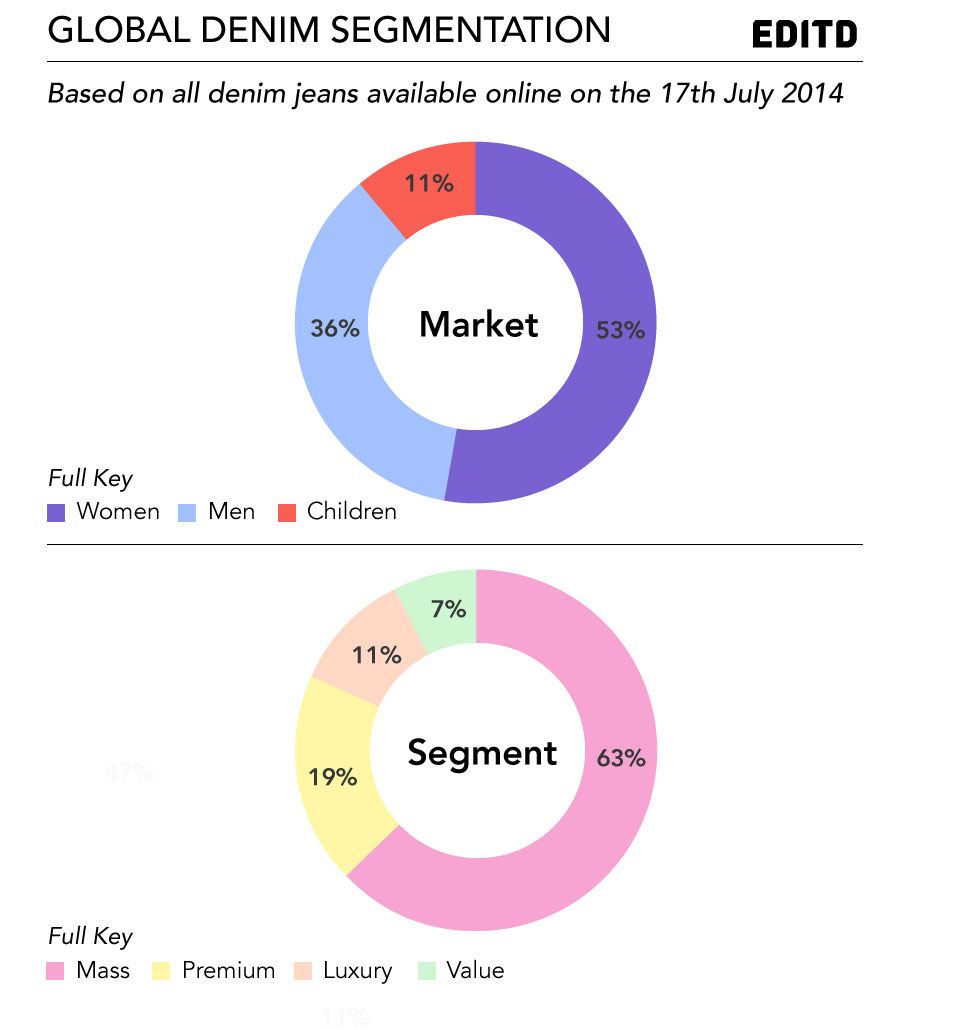 The luxury market is the fastest growing segment for jeans

It is the luxury market however which has shown the most growth in the last 12 months – increasing the number of new products being introduced onto the market by 87% in June 2014 compared to June 2013. Does this signal the end of sports luxe?

The most ‘successful’ price point (as defined by products which sell out at full price) for womenswear jeans arriving on the mass market in the last three months is $30-40. Menswear is a different story entirely – with the most successful mass market menswear new arrivals being priced $100-110.

Earlier in the month, The British Retail Consortium announced apparel pricing in the UK was down for June 2014, compared to June 2013. Global denim pricing does not reflect this. In women’s denim, the premium market has shown a 14% lift in average price for new products arriving online in June ’14 compared to June ’13 – average price of premium jeans is now $301. The biggest gains in the menswear market are in mass, where the average price of new jeans arriving in June ’14 lifted 45% to $178.

Denim has a succinct retail calendar. Women’s denim sees spikes in the number of new products arriving on the market during March and July. Discounting peaks in June, preparing the market for July’s new styles, and November. The area on the chart which shows number of new styles dropping, whilst discounting increases, is a sign of a healthy market. Retailers and brands can use calendars like this to drill down into their specific competitors’ discounting and newness patterns – setting strategy in order to compete. 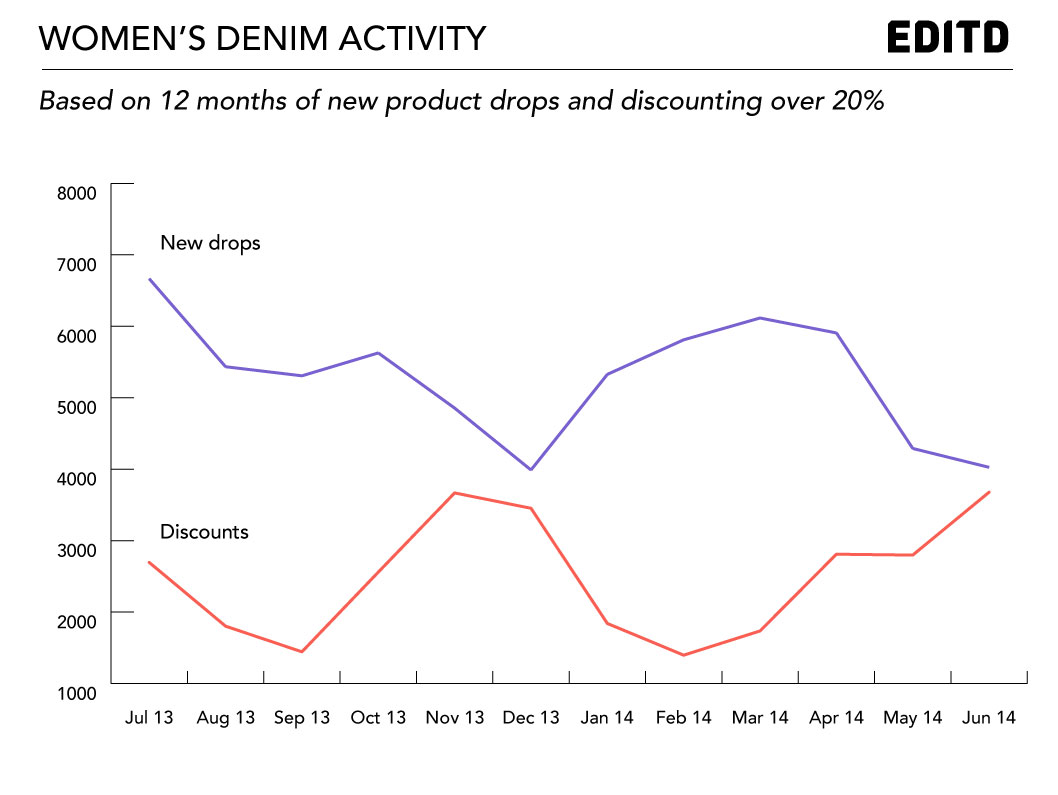 Stay tuned for our next denim articles. We’ll be looking at current denim trends, the fastest selling products and colors, as well as the best core items. Sign up for our Insider Briefing and we’ll alert you when it’s live, with our weekly trend analysis round-ups.