Perpetually in, although never entirely part of a specific trend, the boyfriend blazer has fallen comfortably into the wearable and classic trans-seasonal piece realm.

ASOS alone has 12 different versions of the style in stock at the moment, some of which have been available for close to a year and are yet to be discontinued, and others that are new in store this week.  The style with the most restocks since it dropped into the online retailer over ten months ago is the ASOS Power Shoulder Tailored Boyfriend Blazer.

The jacket was originally created in black, khaki and grey for the winter months, and was later introduced in camel and navy in late winter, with white joining the ranks in early spring, it remains only in navy and white now. Black proved to be the most popular colour and was available throughout the period, until stocking out entirely recently.

With the weather now well on its way to cooling down (in London at least!), boyfriend styles have continued to drop in new colours and cuts over the past month. Topshop’s black version went out of stock in all sizes within two days last week, but has since been restocked in sizes 8 to 16. H! by Henry Holland’s version which sells through UK retailer Debenhams, dropped into stores almost two weeks ago, and in that time sold out three times across sizes 16 and 18, which have since been replenished. 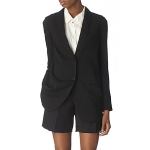 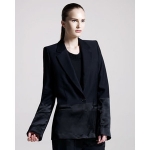 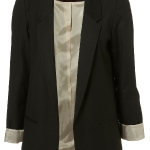 High Street retailers aren’t the only ones to cash in though. With such a classic piece, high-end retailers are continuing to drop their designs in store in time for AW11/12. Maison Martin Margiela’s suiting and satin version dropped into Neiman Marcus in late May, while Theory’s version, which landed into Selfridges in late June has sold out once each in size 12 and 14 already.

The obvious benefit for retailers and brands of having these classic pieces in their collection is that they allow for speedy replenishment of stock and consistent sales. Once retailers have invested the time and resources into creating a style that fits, and a supply chain that is quick response, they can benefit significantly from recreating a classic piece again and again. While ASOS’s version did drop its price a number of times over the ten month period – at one stage in April right down to £26 (in some colours) – it now sits at its original £65. It’s not often that you can say that about a garment that has been on the racks for close to a year.